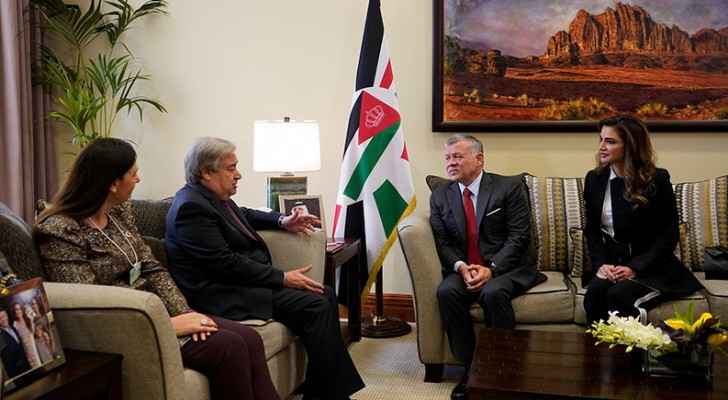 His Majesty King Abdullah, accompanied by Her Majesty Queen Rania Al Abdullah and His Royal Highness Crown Prince Al Hussein bin Abdullah II, met with United Nations Secretary General António Guterres on Saturday and discussed developments in the Middle East and efforts to achieve peace and stability in the region.

King Abdullah stressed the importance of stepping up international efforts to achieve just and lasting peace between the Palestinians and the Israelis, based on the two-state solution, leading to the establishment of an independent Palestinian state on the 4 June 1967 lines, with East Jerusalem as its capital.

Discussions at the meeting, held on the sidelines of the World Economic Forum on the Middle East and North Africa, covered the importance of ending Israeli violations in Jerusalem against Al Aqsa Mosque/Al Haram Al Sharif.

Moreover, the meeting addressed the Syrian crisis, as His Majesty affirmed the importance of reaching a political solution that safeguards Syria’s territorial integrity and the unity of its people, stressing that the Golan is occupied Syrian territory, according to international law and UN resolutions.

A number of regional crises were discussed, in addition to efforts to fight terrorism within a holistic approach.

Foreign Minister Ayman Safadi, Adviser to His Majesty and Director of the Office of His Majesty Manar Dabbas, and the UN chief’s accompanying delegation attended the meeting.