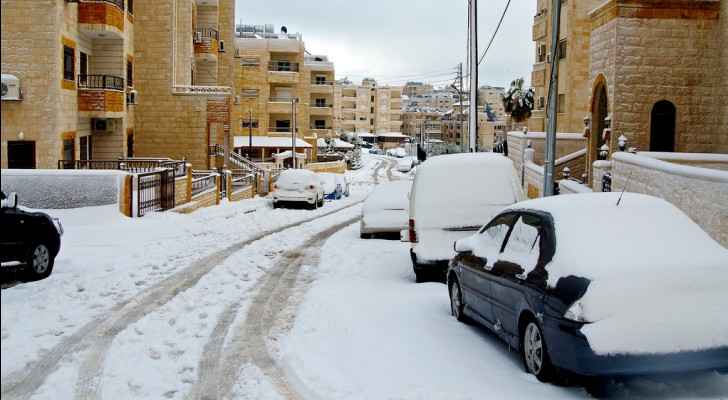 Jordan is expected to be affected by another weather depression coming from northeast Cyprus on Tuesday, January 8, 2019, that will be accompanied by a cold front.

During daytime on Tuesday, the weather is expected to be remarkably cold and accompanied by strong and southern-westerly winds, which may cause dust in the southern and eastern parts of the Kingdom. Temperatures will remain below average for this time of the year by around 5-7 degrees.

In the evening, there will be a chance of rain showers and hail in the northern regions and parts of the central regions of the Kingdom.

At night, a cold front is expected to affect the Kingdom, which will be accompanied by heavy rain, hail, and thunderstorms in the northern parts and will exceed to the central parts of the Kingdom. Very cold weather and strong winds are expected as well.

Snowfall is predicted in areas higher than 1000 meters above sea level and may extend to lower areas and will last until early Wednesday.

In the southern and eastern regions, weather will be very cold, stormy and may be accompanied by local rain showers and light snow. Winds will be southern-westerly.

During daytime on Wednesday, the weather will remain cold, rainy and accompanied by hail. Temperatures will also remain below average around this time of the year between 6-8 degrees. Chance of rain will reduce in the evening.

Recommendations during the upcoming weather depression: