Over the weekend, dozens of protesters had gathered near Jordan Hospital to call for their rights. (Roya) 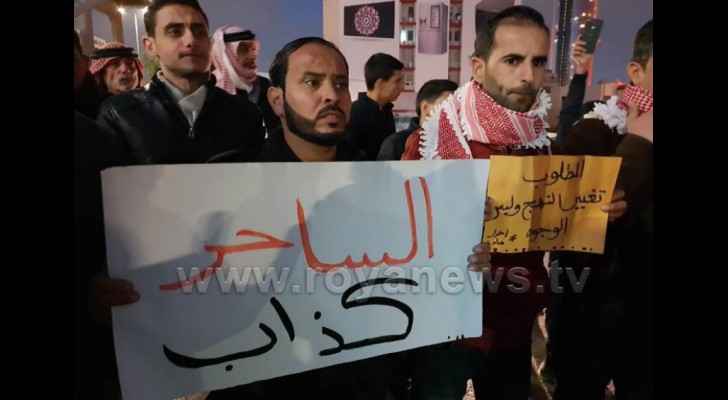 Protesters near the Fourth Circle on Friday and Saturday questioned whether the government has had something to do with blocking their internet connection in that vicinity during the protests, after they were unable to upload videos of the protests on Facebook or to stream them live on the sharing website.

However, Minister of Information and Communications Technology Mothanna Gharaibeh exclusively told Roya on Saturday that the internet was not blocked in the Fourth Circle vicinity, but that uploading videos on Facebook was particularly slow over the weekend, and the few days before it.

Gharaibeh explained that in order to block access to the internet in a certain area, it would require an official request from telecommunications companies, which is something the government did not and would not request.

The official added that videos and pictures of the protests still made it on to Facebook, but the delay and slowness in uploading them was due to a technical error with the website itself.

Gharaibeh noted that other popular sites like Twitter and Instagram were working perfectly fine on Friday and Saturday, meaning that the internet was not blocked from the area.

Dozens of Jordanians gathered near the Fourth Circle in Amman over the weekend to demand that the government scraps the new Income Tax Bill (ITB) and cybercrime laws, brings back subsidies on staple pitta bread and releases speech detainees.

Protesters had gathered near Jordan Hospital to call for their rights, after security forces cordoned off the streets to prevent them from reaching the Fourth Circle, where the Prime Ministry is located.