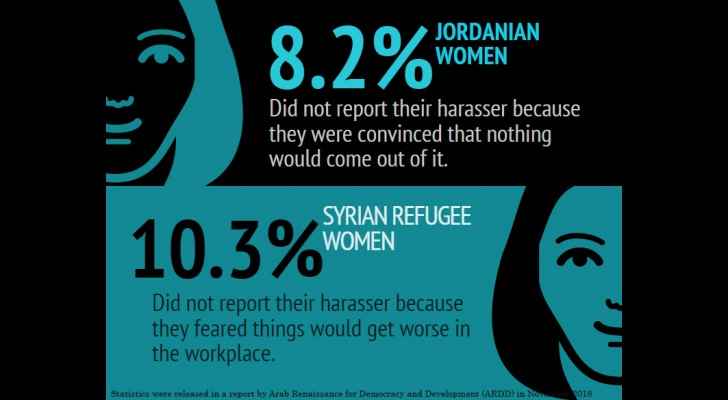 The Arab Renaissance for Democracy and Development (ARDD) released a very important report last week on sexual harassment in the Jordanian workplace.

The “Silent Women: an ARDD report on harassment in the workplace” report came out just in time to celebrate the 16 Days of Activism against Gender-Based Violence Campaign, which runs from November 25, the International Day for the Elimination of Violence against Women, until 10 December, Human Rights Day.

As well as analyzing data, ARDD surveyed more than 400 women aged between 18-50 years.

The women who participated in the study were some of the most vulnerable Syrian refugee and host community women, including Jordanians and other refugees present prior to the Syrian Crisis.

The women were either facing economic vulnerability, as female heads of households, living in poverty, or at risk of debt; faced particularly low access to services; had previously applied for a loan or work permit or had previously faced harassment in connection with pursuing work opportunities.

Of women who sought legal consultations or pursued cases with ARDD for workplace matters, 52% of Jordanian women and 73% of Syrian refugee women informally reported experiencing sexual harassment at work.

Due to a lack in faith in the system, 8.2% of Jordanian women and 12% of Syrian women said that they didn’t report their harasser because they were convinced that nothing would come out of it.

Women’s data collected from the surveys and legal consultations made it clear that laws are neither working to prevent sexual harassment, nor to support women in reporting it.

Samar Muhareb, Head of ARDD, said that the women interviewed noted that verbal and non-verbal harassment were the most common types of harassment, including having their male colleagues or employers touching them unwillingly.

Other types of harassment included being harassed by other women, which were not necessarily harassments of a sexual nature, but of a social discriminatory nature, such as stereotyping and judging them based on their gender.

On the other hand, the majority of participants (84.2% Jordanian women and 95% Syrian women) said that they were never sexually harassed in the workplace.

How does the Jordanian law protect women and encourage them to come forward when they've been harassed? Thus, the rights of women who face ‘subtler’ forms of sexual harassment are unclear, with the term “degradation” open to interpretation. Furthermore, no existing laws compel employers to have written procedures on sexual harassment; thus the implementation of workplace sexual harassment policies that cover all forms of harassment is done at the will of the employer.