In pictures: The torture marks left on kidnapped Younis Qandil

Younis Qandil spent nine hours under the mercy of his kidnappers in a forest in Zarqa. (Roya) 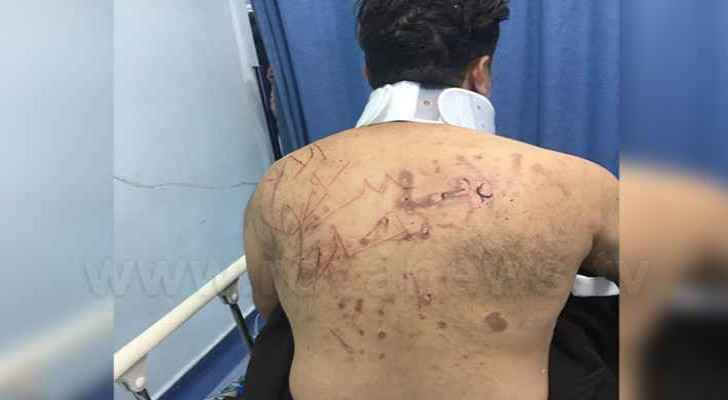 Raed al-Khatib, spokesperson for “Mominoun Without Borders,” told Roya that the institute’s Secretary General, Younis Qandil, who was kidnapped and tortured by an armed group on Friday night, November, 9, has suffered several broken bones and bruises.

Khatib said that Younis’s kidnappers marked the words “Mominoun Without Borders” on his body, and used other methods to torture him, adding that he is currently in a semi-coma due to his critical health condition.

The picture below shows the torture marks on Qandil’s body, after spending nine hours under the mercy of his kidnappers in a forest in Zarqa. Adel Qandil, Younis’s brother, exclusively spoke to Roya this morning, detailing the ordeal that his brother went through.

He said that Younis was stopped by three armed, masked men on a highway in Amman, and was forced to leave his vehicle and accompany the suspect to a forest in Zarqa.

A distressed Adel said that he lays the blame on Jordanian officials, who failed to take his brother’s plea for help seriously.

Adel confirmed that before the incident, Younis had informed the authorities that he was being threatened with more than 2,000 threats on social media, but to no avail.

According to Adel, the Public Prosecutor received a copy of those threats when Younis filed an official complaint, however, “no one seemed to care.”

You can learn more about “Mominoun Without Borders” by clicking here.

One of suspects of 'tobacco case' dies due to heart attack