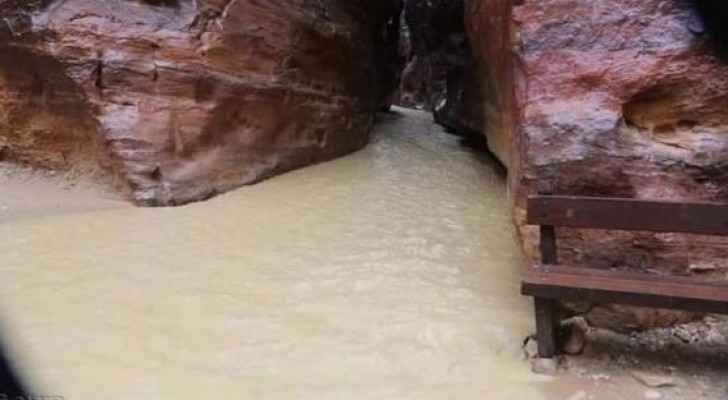 Cadres of the Petra Directorate managed to secure 3,500 tourists from the ‘unprecedented’ flash floods that raided Wadi Musa, on November 9, 2018, according to Petra District Director, Sultan Al Madi.

Madi added that the flash floods were unprecedented, and that maximum state of emergency was announced.

He pointed to the closure of the Wadi Musa road due to blockage caused by rocks and mud slides.

Madi confirmed that there were no injuries among citizens and tourists in the Petra area.

In turn, head of the Petra Region Authority, Suleiman Farajat, told Roya that authority cadres are stationed about 15 km from the entrances and valleys of Wadi Musa, adding that the early warning system was launched and none of the tourists were harmed.

The sale of tickets was stopped at 12 pm, which led to the reduction of tourists inside the city and therefore no one was hurt as the authority cadres secured the tourists inside Petra city, until the storm ended.

Ma'an Governor, Ahmad Al Amoush, told Jordan News Agency (Petra) that the floods raided a number of areas after heavy rainfall, and added that some roads have raided by floods.

He added that the Petra Commission is working to evacuate tourists from inside Petra and transfer them to hotels according to the emergency plan, stressing that the operating rooms and the concerned authorities are following up on the situation.

For his part, the Director of the Civil Defense of Ma'an Governorate, Salem Al Sarayrah, said that the weather conditions in Ma'an and Petra Governorates are very normal after the rains have stopped, pointing out that any emergency caused by rain storms is being dealt with.

Petra Development & Tourism Region Authority called on citizens to exercise caution and not to approach water and flood areas.