Jordanian PM Omar Razzaz and US Congresswoman Ileana Ros-Lehtinen during the meeting. 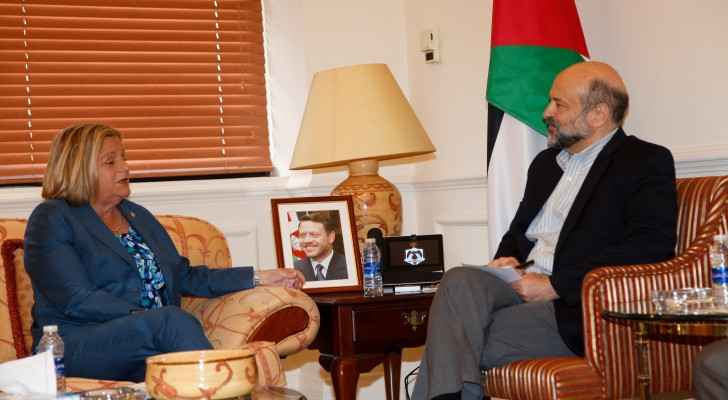 The meeting, which was also attended by a US delegation and the Jordanian Minister of Political and Parliamentary Affairs, Musa Maaytah, discussed bilateral relations between the two countries and the latest developments in the region, especially the Palestinian issue.

Razzaz expressed his appreciation to the government of the United States of America for both its continuous support to the Kingdom and for its efforts in enhancing the Jordanian economy. He added that the reopening of Jaber-Nasib Crossing between Jordan and Syria is expected to help boost the export-import cycle with Syria, Lebanon and Europe.

As for the Palestinian issue, Razzaz stressed that Jordan is committed to working with all parties in order to achieve peace in the region. The Prime Minister also stressed on the importance of supporting the United Nations Relief and Works Agency for Palestine Refugees (UNRWA) as it hugely contributes to providing services to the Palestinians, especially in the health and education sectors.

Congresswoman Ileana Ros-Lehtinen praised the strategic partnership between the United States and Jordan, stressing that Jordan is a real partner in the Middle East. She also praised the leadership of His Majesty King Abdullah II, stressing that Jordan represents a wise and moderate voice in the region as it has always been and still remains a central element that ensures security and stability in the Middle East. She also expressed her appreciation for Jordan’s efforts in hosting Syrian refugees.

King speaking to CBS on Jordan's efforts in stopping ....

King speaking to CBS on Jordan's ....

US House of Representatives votes to impeach Trump

US House of Representatives votes to ....