A first in Saudi Arabia: Women hold lecture in front of audience of men

A first in Saudi Arabia: Women hold lecture in front of audience of men 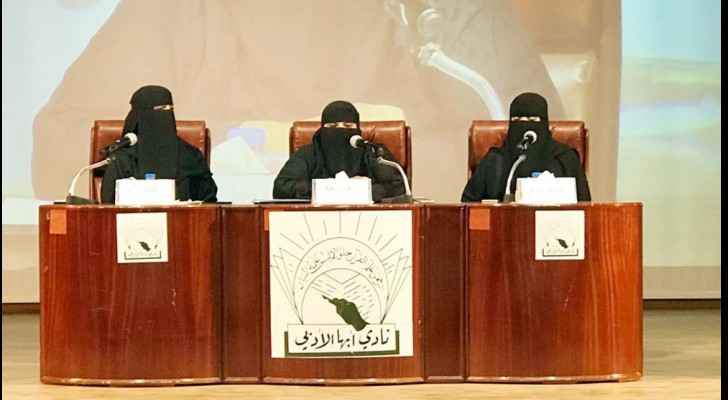 Saudi Arabia witnessed the first woman-led lecture in front of a gathering of men, on Wednesday, October 3, 2018, according to Saudi newspaper Okaz.

The Abha Literary Club in cooperation with Saudi General Authority for Culture organised a lecture entitled “The Homeland and Women.. Future and Responsibility” with the participation of three women Dr. Ghada Al-Ziad, Saliha Al-Jar’i and Zahra Al-Thafer who gave the lecture to a gathering of men.

Al-Jar’i said that the positive change in the status of Saudi women is a result of the new majors offered at colleges. The external scholarship program initiated by King Abdullah of Saudi Arabia also gave women greater, more comprehensive opportunities which enabled them to take on leading roles and executive positions in the work fields.

Dr. Al-Ziad explained that the legal rights of Saudi women, which are guaranteed by the system through regulations, have given women psychological security in litigation, courts and has seen to the implementation of women rights.

The lecture had an emotional impact and led to interaction with a number of attendees.

Dr. Ahmed Tehani, Board Member of the The Abha Literary Club, pointed out that what Jar’i referred to about the beginnings of education and the old images in the region deserves attention. He also mentioned examples of local women intellectuals and scientists who lived more than a century ago.

Professor Ali Mousa, professor of linguistics at the College of Languages and Translation at King Khalid University said, “For the first time in my life, I attend and see three young women from my homeland talking about their future and mine. Women have been absent for the last 50 years, and that meant not hearing the voice of 50% of society.” He added that the voice of women has been missed and their absence marks a loss.

Professor Mousa added that the Saudi community needs a lot of time, that might reach beyond 2050, to naturally accept and support women achievements. He applauded the pioneering women of today and noted their important role for the future Saudi generations.

Mohamed Othman Al-Ghamdi spoke about the impact of male bullying on the growth of Saudi women, which hindered their work, along with their cultural and skills development.

Saudi Arabia has recently initiated a number of reforms with regard to women's rights within the “Vision 2030”, led by Saudi Crown Prince Mohammad bin Salman.