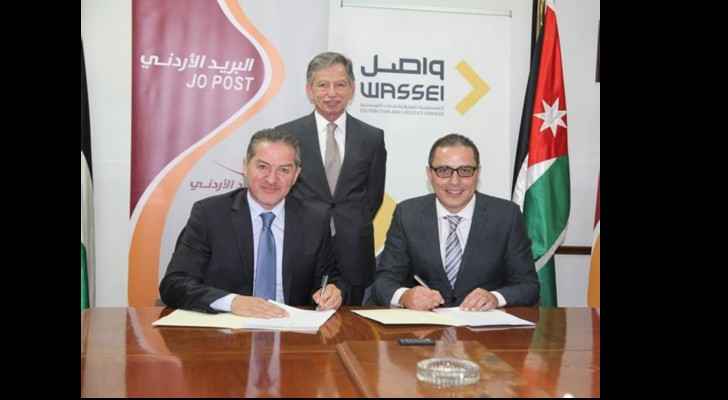 Jordan Post Company (JPC) signed a cooperation agreement with the Palestinian Distribution and Logistics Services Company “WASSEL”, on September 29, 2018, to provide a service for receiving renewal requests of Jordanian passports for Jerusalemites.

Laham said that the agreement came in line with the Royal Directive to support Jerusalemites in facilitating renewals of passports through the offices of the Jordanian Shari'a Courts in Jerusalem. WASSEL in cooperation with JPC in Amman will be delivering the documents to the Jordanian Civil Status And passport Department (CSPD) and will be returning them to the owners, after the completion of procedures.

For his part, Tahboub stressed on the importance of the cooperation with JPC through this agreement, which embodies the fraternal relations between Jordan and Palestine. He expressed appreciation to His Majesty King Abdullah II, the Jordanian government and Jordanians for their continuous efforts in supporting the Palestinian people.

Tahboub noted that the agreement is an achievement for JPC and the CSPD for facilitating procedures to Jerusalemites.

JPC seeks to expand the fields of cooperation with public and private sectors, institutions and companies in the region, through strategic plans set by the JPC management which will positively reflect the development and expansion from the traditional framework of postal service.

Police catch the perpetrators of the Zarqa post office ....

Police catch the perpetrators of the ....