The angry citizens wee protesting against the rising cost of electricity. (Roya) 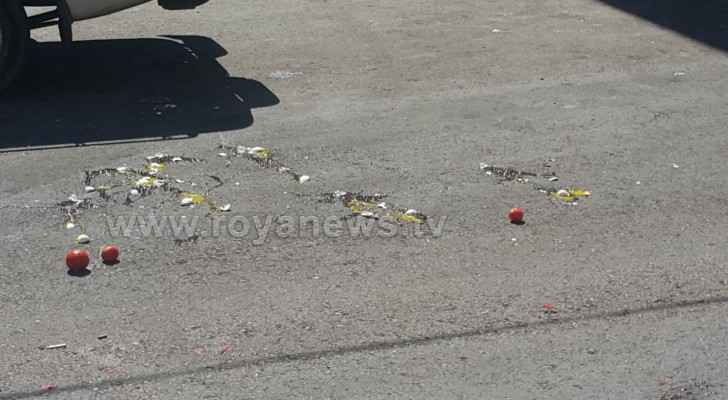 A group of people used dozens of rotten eggs and tomatoes to attack the car belonging to the GM of the Irbid District Electricity Company (IDECO) on Thursday.

Ahmad Theinat was making his way to a school in northern Irbid when a group of angry citizens attacked him in protest of the rising cost of electricity.

The GM was headed to the school to sponsor one of their initiatives, however, his car was painted red and yellow as soon as it arrived at the main entrance of Hikma town, a source told Roya.

The source explained that IDECO is not responsible for raising electricity prices and that the government imposes the prices on the electricity company.

Aqel, who is Secretary of the Association of Petrol Station Owners, told Roya that “the price of crude oil has jumped from about $76 a barrell at the beginning of September 2018 to highs of $80.32 today.”

The expert predicted that the gov’t will raise fuel prices by 5% or 6% due to the rise in crude oil prices worldwide.

According to Aqel, Jordanians will have to fork out more money on their electricity bill too, as he predicts an increase in energy tariffs next month as well.

Fuel prices will NOT increase in ....