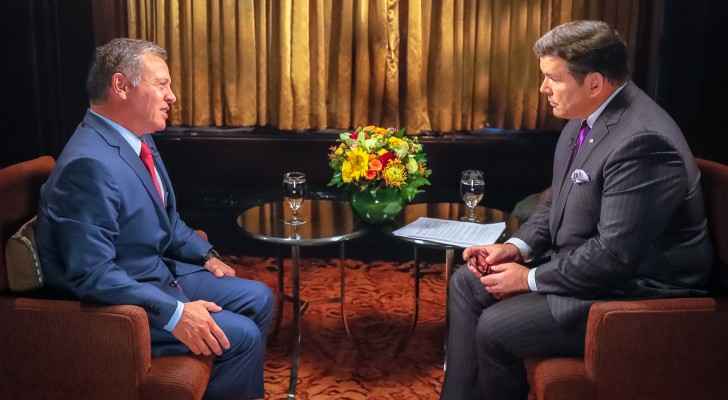 Below is the transcript of the interview.

HM King Abdullah: Where do you want to begin? I think the problem is at all points of the compass, we still have challenges. Syria to an extent, ISIS is defeated, not destroyed. You can apply that to Iraq also. But how do we move the political process in Syria? How do we stabilise? This is something we can get into. It’s relatively calm in the south because there’s a crisis management centre that is operated by the Russians and Americans in Jordan, hosted by us for deconfliction. We’re looking to make the south better. Iraq is still going through some of its turmoil so obviously as the government settles down we want to make sure that the national military is all-encompassing and a building block to move to the future.

We have the Israeli-Palestinian issue to our west, Yemen to our south, so we have to be light on her feet and there’s a lot of balls being juggled in the air.

Bret: It’s a busy neighbourhood. On the ISIS front, the large perception was the they’ve been destroyed largely, but there seems to be either a comeback or an ideological kind of upbringing for young people.

HM King Abdullah: Keep in mind we are calling these people ISIS or Da’esh. if they no different than Al-Qaeda, Al-Shabaab or any other group out there. This is a global problem. They are the most used names because they are the most vicious, the most violent, but that doesn't mean that all those groups are any different from each other. So today we are talking about ISIS. Four or five years from now maybe there’s another name that’s developed and they become even worse. There are two stories in Syria and to an extent two stories in Iraq. One is the country is moving forward and redeveloping themselves but there is still a fight against insurgents.

Bret: you have concerns about the peace process.

HM King Abdullah: The President from day one was committed to a fair and balanced deal for the Israelis and Palestinians to move the process forward. We’re not too sure what the plan is, that’s part of the problem, so it’s more difficult for us to be able to step in and help. What I'm worried about is that we will go from the two state solution to a one state solution, which is a disaster for all of us in the region, including Israel. If most of the final status issues are bing taken off the table then you can understand Palestinian frustration. So how do we build the bridges of confidence between Palestinians and the United State? Whatever people say, you cannot achieve a two state solution or a peace deal without the role of the Americans. So at the moment the Americans are speaking to one side and not speaking to the others and so that’s the impasse we are at.

Bret: President Trump, if anything, is pretty blunt.

HM King Abdullah: Exactly. I think that’s the breath of fresh air… if we go to the one state solution, here are the problems that we’re all going to face. He went from A to Z. He went straight through the problem, came to the solution, and we looked at each other and said okay, we need to work on the two state solution.
The one state solution I think is a major problem for how Israel presents itself and internally how it presents itself because the reality is that we’re talking about apartheid and that I think a lot of supporters of Israel outside of Israel are really concerned are they heading in the right direction.

Can we get to the two state solution on track? Can we find an amiable and fair solution between the two others?
Because the one state solution frightens the heck out of all of us.

Bret: Last time we talked the region was in turmoil. ISIS was on the rise in 2015, the other thing we talked about back then was Yemen.

HM King Abdullah: (from previous interview) I would humbly suggest the quicker we find a political situation to that issue the better.

I still believe that’s the case, three years later. It’s a very difficult campaign and the quicker that all of us get to a political solution; I know the Saudis are working very hard. We have to keep in mind the concern of the humanitarian crisis which i think is still unfolding. The UAE have been really leading forward in trying to bring as much supplies as possible to the Yemenis but unless we can get the parties together to find a political solution, this is going to continue to be a black hole for all of us, I think.

HM King Abdullah: Like many other places in the region. You can see the Iranian signature, the Iranian crescent, whether it’s in Iraq, Syria or Lebanon.

Bret: Is there a way to get Syria to a political solution?

HM King Abdullah: We’re working on things. Sometimes the policy changes by certain people in American institutions, that sort of throws us off a bit. Having said that, the Americans and the Russians have joint command center in Jordan that helps in deconfliction. We do have a strategy. We had agreements with the Russians and the regime on dealing with the Iranians. We had a hiccup in the past couple weeks but I'm expecting hopefully that will come back into the right fold. And as I said we are all working on understanding that the Iranians are not helping anybody. But again from the Iranian point of view, they want to be as close to the Mediterranean as possible so they will do all efforts to continue to be in those areas and to be a mischief maker.

Bret: In your country, 20% of the population now refugees.

HM King Abdullah: 21% only Syrian refugees, that’s not to count almost a million illegal Egyptian workers in our country that we took a decision many years ago not to send back to Egypt because it would destabilise their economy. So, that’s the right thing although the difficult thing. A couple hundred thousand Iraqi refugees in our country, and a total of about 50 to 60 thousand Yemenis and libyan refugees.

Bret: What kind or pressure does not put on Jordan?

HM King Abdullah: Tremendous! 21% of a population increase in a couple of years; that’s like 60 million Canadians just appearing on your boarder in a period of two to three years. And then you have to take at least a quarter of your budget for a couple of years just to look after your guests.

We do have to reform, we do have to become self-sufficient but donor fatigue is a major problem and it’s an international responsibility. If you look at how many refugees Europe has taken and see the role that Jordan has done, we’re actually taking the load off a lot of other countries. Help us, because we are doing the right thing.

Bret: Some people in the U.S. say you’ve got a bunch of rich countries there, Aaudi Arabic, the UAE, oil rich countries; are they chipping in?

HM King Abdullah: We hope that they can do more. The UAE has built refugee camps in Jordan and supported the refugees but we are in discussion with them to see whether they can help us a bit more because of these challenges.

Bret: What you tell you kids about the future?

HM King Abdullah: We are in a very chaotic world today where there are enemies around us all, specifically these extremist groups. This issue is going to be with us for the next ten or 15 years. Whether we like it or not this is an international fight. I call it a third world was by other means, which is going to be amongst us unfortunately a decade or two. I hope the military aspect will be short but then it’s the ideological aspect we will have to fight over the next ten to 15 years.

Bret: Your majesty, we appreciate your time, thank you very much.