'We have a long way to go to deliver global opportunity and hope, but we can’t simply give up because the task is hard.' (YouTube) 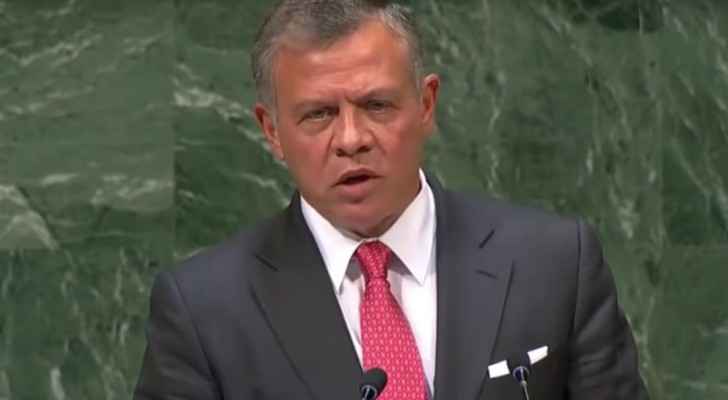 King Abdullah II delivered a speech at the 73rd Session of the United Nations General Assembly in New York on Tuesday.

World leaders listened to His Majesty’s speech, while he met with some of them during his trip to New York.

"In the name of God, the Merciful, the Compassionate,

Thank you. It is an honour to take part, once again, in this great General Assembly.

The United Nations was born in the ashes of the Second World War, out of a deep desire to protect new generations from suffering, destruction, and want. Today, these hopes still face challenges; peace and stability have met threats in every region; too many people remain excluded from the promise of prosperity, and global terror continues to target all nations. Here in this chamber, I’ve called it a third world war.

These challenges do not make collective action and mutual respect less important. They make our partnership more important. Because what is the alternative? A world without the peace and accord we need to work together, trade together, expand opportunity together? A world where crises are not resolved, but magnified?Violence spreads, more refugees flee, because we can't work together to help people stay safe and thrive?

We have a long way to go to deliver global opportunity and hope, but we can’t simply give up because the task is hard. All our countries benefit when we unite in common cause. I am compelled to talk about this today because of the critical role of collective action in ending the serious crises in my region, and especially the key crisis—the long denial of a Palestinian state.

Every UN resolution since the beginning of this crisis—every resolution, whether from the General Assembly or the Security Council—recognises the equal rights of the Palestinian people to a future of peace, dignity, and hope. This is the heart of the two-state settlement, the only path to a comprehensive, lasting peace.

Only a two-state solution based on international law and relevant UN resolutions can meet the needs of both sides: an end to conflict, a viable, independent, sovereign Palestinian state on the 1967 borders with East Jerusalem as its capital, and a secure Israel, fully part of its own region, recognised by Arab and Muslim states around the world.

Arab and Muslim countries are committed to a comprehensive peace; the Arab Peace Initiative has been on offer for more than 16 years. Indeed, every major country in the world, the UN, the European Union, all have worked to help the parties reach a durable peace that can last. The US administration has long been committed to peace, and has a leading role in our progress going forward.

Yes, we have a long way to go, but we can’t give up because the task is hard. Because, what is the alternative? Can we afford to let one of the world’s most strategic regions be tied to an endless cycle of violence in its midst? How long must Jerusalem, a holy city to more than half the world’s people, face dangers to its multi-faith heritage and identity? How can we accept a status quo of continuing crisis and bigotry? Palestinian families displaced for generations, their children’s very identity denied. Israeli families, living in continuing national self-isolation; without the security of peaceful relationships worldwide.

And what could possibly be the future of what some propose: a single, bi-national state, whose very foundation is a rejection of the equality of its own people? That’s the ugly, undemocratic reality of the one-state idea. It is by no means an alternative to a two-state peace settlement, it is an abandonment of peace, a new way to go AWOL from the work of reconciliation, and the opposite of what both sides need, and have sought for so long.

There is no such thing as a unilateral agreement; it takes at least two parties to make an agreement. Helping the parties achieve that agreement, and work together to build a new future, deserves the strong, steady support of all our world.

Our countries need to pull together to get this peace process back on track. That means utterly rejecting actions that jeopardise negotiations, whether by illegal encroachments, land confiscations, or threats to the welfare of innocents, especially children.

We need to support full funding of UNRWA and other vital efforts to protect families, keep communities stable, and prepare young people for productive lives. It would be a terrible mistake to abandon youth to the forces of radicalism and despair. Such support is urgently needed to ensure UNRWA fulfils its role, in accord with its UN mandate.

Above all, we need to safeguard the heritage and peace of Jerusalem, a holy city to billions of people around the world. The Hashemite Custodianship of Islamic and Christian holy sites in Jerusalem is a duty that Jordan is proud to carry, and we will counter any attempts to change the holy city’s historic Arab Christian and Muslim identity.

But Jerusalem’s future is not Jordan’s concern alone; it is yours. There are global implications when religious worship is threatened and international law is undermined.

Collective action is also vital when it comes to resolving other conflicts and crises that threaten our world.

Jordan will continue to support all multilateral efforts to help Syria achieve a political solution, based on the Geneva process, and UN Security Council Resolution 2254, to safeguard the country’s unity, sovereignty and territorial integrity, and create the conditions for stability and rebuilding.

An effective global response to terror also requires continued collective action. Let’s be clear about it: for all our victories, the fight against these outlaws, the khawarej of Islam, is not over. Winning the war demands a long-term, holistic approach, one that pairs security measures with strong initiatives that support inclusion and hope. Offline and online, we must counter all—I say all—ideologies of hatred, including Islamophobia.

Jordanians have led efforts to unite the world in mutual respect and understanding.

Finally, we must also strengthen our collective response to the global refugee crisis.

As many of you know, Jordan has carried a massive, disproportionate burden as a refugee host. Our people have opened their homes, schools, public services, hospitals. We have shared our country’s scarce resources, our food and energy, our precious water. The crisis has held back economic growth and job creation, jobs urgently needed by our young people, more than 60 percent of our population.

Jordanians have borne this refugee burden in full accord with our country’s long humanitarian traditions, but we know, and the world knows, that this crisis is a global responsibility. The sacrifices we and other host countries make every day can only continue if donor nations hold up their side of the partnership. That means continued, multi-track efforts in development support and humanitarian assistance; efforts which not only prepare refugees to return home and rebuild their countries, but also give hope to the people of host countries, who have sacrificed so much.

The world cannot address the refugee crisis, or any global crisis, unless we work together to support those who are doing the right thing for the future we all share.

Peace and prosperity demand constant, collective action. The alternative is to fail our history, and fail our future.

Let us choose, instead, to succeed, to give the world’s people, especially young people, confidence in global justice, hope for new opportunity, and international laws and agreements and institutions that everyone can rely on.

King meets representatives of international, US ....

King meets representatives of international, US ....