Highlights of King meeting with Cabinet

Highlights of King meeting with Cabinet 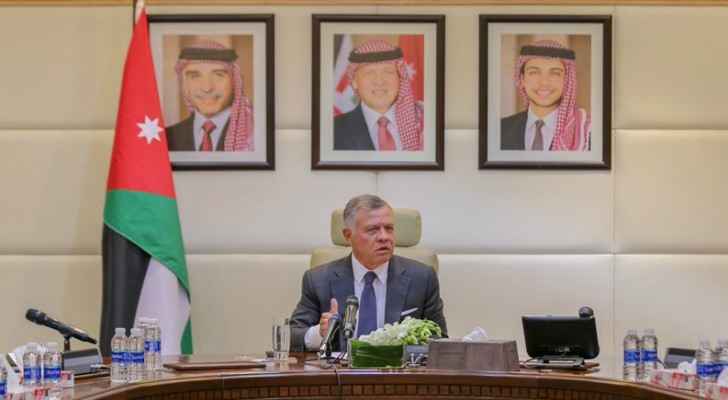 His Majesty King Abdullah II, during his visit to the Prime Ministry on Sunday, August 5, 2018, stated that it is the duty of officials to provide citizens with the best services, to directly communicate with them, and to follow up with their needs.

His Majesty expressed his appreciation for the governmental approach towards communicating with Jordanians. "Communication is very important, I am following your efforts, and it reflects sincerity," he said.

On the economic state, His Majesty commented that everyone is aware of the challenges that currently face the country, which require cooperation between the government and all local institutions.

The King stressed that there should be focus on relieving the burden on Jordanians through cooperation and coordination. He pointed out that governorates’ field visits are vital to be able to address the challenges associated, stressing that these challenges will be resolved.

His Majesty also emphasized that fighting corruption is of top priority for the government, for him personally and for all institutions.

The King praised the seriousness of the government in dealing with the “Tobacco Case”. Stressing that what happened is "a message to all those who attempt tampering, this is a red line, and we want to put an end to corruption in the country… We must move forward," he said.

King Abdullah reiterated the importance of employing the rule of law without tolerating anyone who tries to cross it. "No one is above the law regardless of who he or she is," he added.

In regard to rumors, His Majesty said that efforts must be maximized to defy them. He added “We want to develop our country, and we work transparently to fight poverty, unemployment, and corruption… However, character assassination is not allowed and sedition is a red line.”

His Majesty stressed that Jordan is moving forward with steady steps. Personal interests and private agendas should never surpass the overall interest of the Kingdom nor its people, he added.

His Majesty confirmed that everyone – Ministers, Deputies, Dignitaries, and any other official—must be devoted to the good of public.

As for the current government of Prime Minister Omar Razzaz, His Majesty expressed his appreciation for the exerted efforts, and affirmed his full support for all the efforts done since its formation.

As for His Majesty’s recent visit to the United States and his meetings in Washington with US President Donald Trump, the administration and Congress, the King stated that the Kingdom’s stand in the Palestinian issue is well-defined, which is based on the two-state solution and the establishment of an independent Palestinian state with East Jerusalem as its capital.

King Abdullah also stressed that "our stand towards this is fixed and always the same, whether behind closed doors or publically" adding that there is “no pressure on Jordan" regarding this issue.

"I hear many rumors from inside and outside … Where do they come from? We do not know," His Majesty added.

His Majesty the King pointed out to his meetings with leaders and economic officials in the United States, was to attract investments to the local market in various fields. Investments that will result in providing more job opportunities. Many expressed a desire to invest and support Jordan, and take it as a regional center for their business, he added.

"We have some challenges in the procedures which we have addressed more than once… We will improve things. It is a priority to fight poverty and unemployment as soon as possible," he concluded.