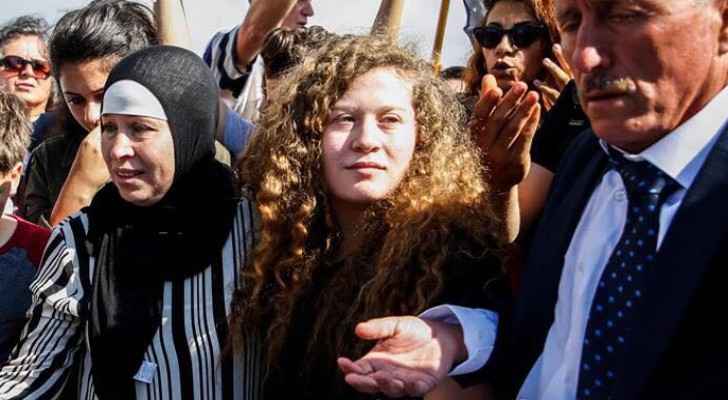 Ahed Tamimi was released today after staying behind Israeli bars for eight months. News of her release was confirmed yesterday as both her lawyer Gaby Lasky and her father Bassim Tamimi announced the release of the Palestinian heroine along with her mother Nariman. Tamimis are expected to release a statement later today - the timing of th press conference is not announced yet.

Below is an up-to-date track of their whereabouts:

A press conference of Ahed Tamimi sitting in between her father and mother took place in Nabi Saleh near her house. She addressed the attendents directly, started with thanking everyone who stood beside her including media representative who supported her and delivered her message to the whole world.

She urged the journalists to continue covering stories of prisoners who still live their days and nights in Israeli jails.

Ahed said that the journey is still long and that she definitely plans on going on. She also sent her regards to Khan Al-Ahmar and Gaza residents who are stranding all against all the ordeals they are going through.

Ahed stressed that Jerusalem is and will always be the capital of Palestine. Adding that while she is here, she sends a message of solidarity to 29 female prisoners she left behind, three of whom are minor females in Sharon prison, and their names are: Lama Bakri, Manar Shweiki and Hadeyyeh Erainat.

While in prison, Ahed managed to complete her Tawjihi studies -General Secondary Education Certificate Examination that qualifies for university- along with some of the female prisoners who were with her. Ahed said that Israeli occupation tried to shut down the class and dis-encourage the girls from studying - but they were determined to succeed.

Reached in Nabi Salih, Ramallah. Entered Izz Al-Din Tamimi house; Ahed's relative who was killed by Israel Forces at the age of 21.