Prime Minister, Omar Razzaz, delivering his speech in front of members of the Parliament. 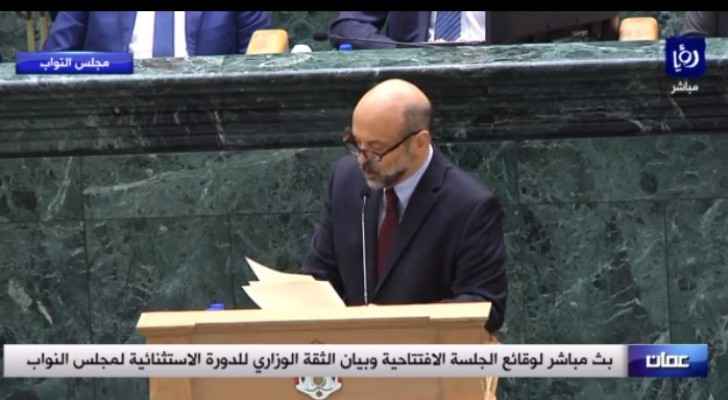 In the speech, Razzaz stressed on prioritizing reforms that will positively affect Jordanias, adding that "citizens are already tired of all the decisions that the government took. Their income has not improved and their purchasing power has declined." Razzaz then pointed that these actions must be promptly executed and inflict tangible results accordingly.

The Prime Minister added that the Government promises to fulfil each of the following tasks within its 100 days of formation:

1. Reducing expenditures by 151 million Jordanian Dinars.
2. Launching a national dialogue on drafting the Income Tax Bill.
3. Forming a technical committee to study the overall tax burden, for the purpose of conducting a comprehensive review of the tax system, in order to achieve justice.
4. Declaring oil pricing mechanism to the public.
5. Studying amendments of the Civil Service System, while proposing recommendations to meet the development goals of human resources.
6. Establishing a clear, efficient and easy mechanism for treaments of cancer patients.
7. Reviewing pensions associated with Ministers’ retirement.
8. Initiating a comprehensive study to restructure governmental performance and control its expenditures.
9. Endorsing a control system over private schools in regard to the tuition fees and the payment methods of salaries to better protect the rights of teachers.
10. Launching an electronic platform that opens a direct commuication channel between the citizens and the government.
11. Approving a ‘code of conduct’ system that keeps an eye on the performance of ministers and government officials.
12. Following up on cases referred by the Integrity and Anti-Corruption Commission to the Public Prosecution and re-evaluating legislations associated with fighting corruption.
13. Providing a clear plan, with a specific timeline, to improve services in health, education, transportation and water sectors.
14. Implementing a strategy for human resources development with a specific timetable for the implementations.
15. Boosting partnerships between the Public and the Private sectors.
16. Reducing the Tax rate on Hybrid vehicles.