His Majesty meets with US lawmakers at Congress on Tuesday 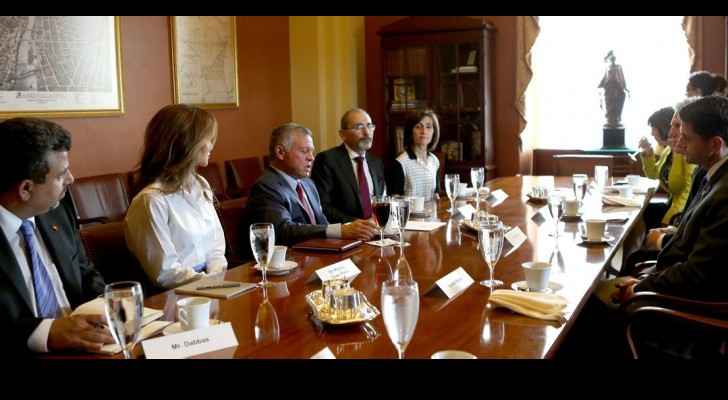 His Majesty, King Abdullah, on Tuesday held a number of meetings at the US Congress with leaderships from the Senate and the House of Representatives, as well as the chairs and members of the House Committee on Foreign Affairs, and the House Appropriations Subcommittee on State, Foreign Operations, and Related Programmes.

The meetings, partly attended by Her Majesty, Queen Rania Al Abdullah, covered the strategic partnership and bilateral ties between the two countries, cooperation in various fields, as well as the latest regional and international developments, the King’s official website reported.

Discussions with Senate Majority Leader Mitch McConnell (R-Kentucky), House Speaker Paul Ryan (R-Wisconsin), and the committees also covered the latest developments in the Middle East region.
The talks addressed the economic challenges Jordan is facing—the majority of which have been caused by regional crises—and means to overcome them through programmes to bolster Jordan’s economy, stimulate growth, and generate more job opportunities for Jordanian youth.
In addition, discussions touched on the great burden Jordan is shouldering as a result of the Syrian refugee crisis.

During the talks, King Abdullah expressed his appreciation for the continuous support the US has offered Jordan to help overcome the difficulties emerging from regional crises. The King stressed that Jordan cannot take in more refugees, affirming that the Kingdom’s security and interests are the priority.

Discussing the peace process, His Majesty stressed the urgent need to reach a just and comprehensive peace plan based on the two-state solution that enables Palestinians to establish an independent state on the 1967 lines, with East Jerusalem as its capital.

Talks also addressed terrorism within a holistic approach, the threat posed by Iran, and ways to maintain stability in the de-escalation zone in southwestern Syria, which was agreed upon last year by Jordan, the United States, and Russia.

Members of the House Committee on Foreign Affairs, and the House Appropriations Subcommittee on State, Foreign Operations, and Related Programmes said they consider Jordan the voice of stability and civility in a very troubled region”.
Foreign Minister Ayman Safadi, Royal Advisor Manar Dabbas, Adviser to His Majesty for Economic Affairs Mohamad Al Ississ, and Jordan’s Ambassador to the United States Dina Kawar attended the meetings.