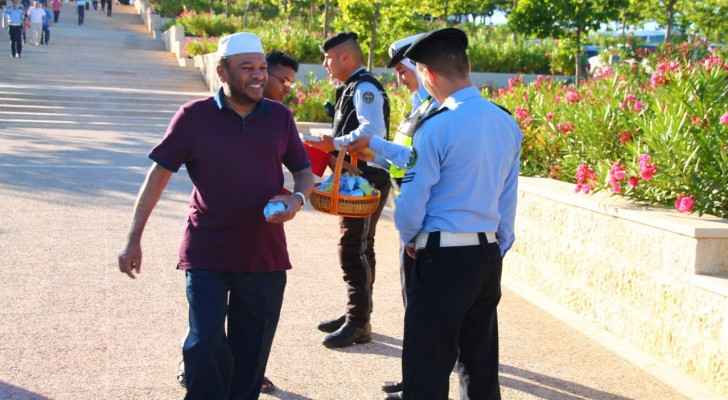 People coming out of Eid prayers in mosques in Amman and around the kingdom were pleasantly surprised to find Central Traffic Department (CTD) officers stationed with baskets of Eid treats.

Young and old alike were happy to receive greeting cards with wishes for a blessed holiday and sweets, which are both customary staples of the season.

On the first day of Eid CTD staff could be found at the gates of various mosques including King Hussein Bin Talal Mosque, better known as the King Hussein Mosque, the largest mosque in Jordan. It is located near Amman’s most expansive park, which is a popular site for family outings during sun-drenched holidays.

Officers also distributed gifts at the King Abdullah I Mosque, which is an integral structure to Amman’s identity. Located in the capital’s downtown, the mosque is a beloved site for both worshipers and tourists.

Citizens and foreigners enjoyed the beginning of Eid festivities and expressed their gratitude to the officers, particularly for their efforts to ensure the holiday runs smoothly and peacefully.

The CTD, on the other hand, has assured the public that it will respond to emergencies throughout the holiday, similarly to other departments that serve the public.

Below are some photos from the King Hussein Mosque from earlier on Friday, the first day of Eid.