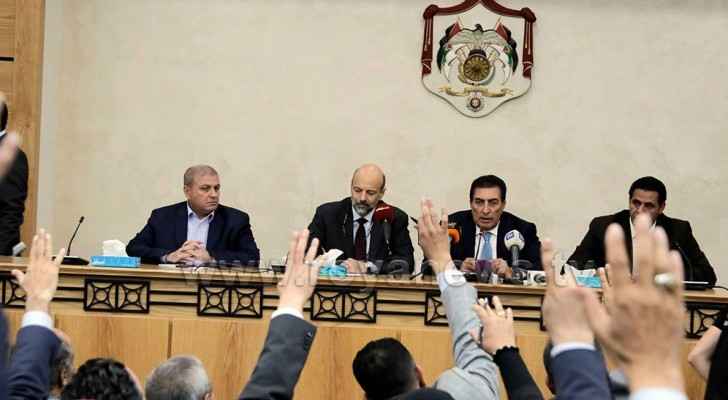 Prime Minister designate, Omar Al Razzaz, held a meeting behind closed doors at the Lower House of Parliament on Monday afternoon as part of a series of meetings and consultations he is holding in advance of forming a government.

Razzaz emphasized that he will work hand in hand with parliamentarians in order to meet the various economic and social challenges facing the kingdom. He stressed that all parties must commit to the participatory approach to reach what he called a "pact."

According to the PM, the pact will be the result of a national dialogue and abide by the King’s seven Discussion Papers, instigating the shift toward a parliamentary government. The third paper in particular states that the prime minister should, in the future, be appointed by the parliament, in a form of direct democracy.

Razzaz stressed the importance of launching a national plan for the implementation of the economic and political reform in a coherent manner that involved all the segments of society.
"Young people are waiting for us to work together so they can feel like active participants rather than audience members,” the PM insisted.

The PM was determined to avoid repeating the mistakes of previous governments and reiterated that he would not form a technocratic government but would rather focus on selection criteria for his ministers such as integrity, honesty, proven performance record, and ability to cooperate with fellow ministries.

Razzaz dispelled rumours that he was being pressured in his selection process and asserted he had been given ample time to form his cabinet. It is still uncertain whether he will refer the final list of minister to the King before the Eid Al Fitr holiday, which starts on Friday.

The meeting followed his discussion with the general secretaries of Jordanian political parties earlier that day. It did not have a smooth start as PM Razzaz was late to arrive due to heavy traffic.

After waiting for 10 minutes, a number of MPs returned to their offices and some even left the building entirely. Most of the MPs, however, returned to the Akif Al Fayez Hall once Razzaz arrived.