Sixth day of 4th Circle protests "We don't have any [money]" 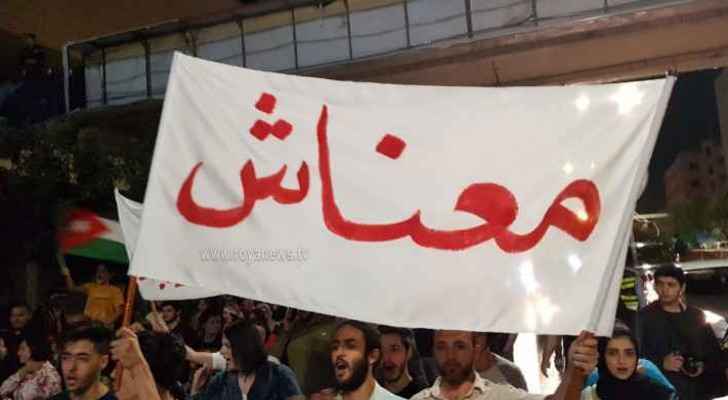 The demands for economic reform persisted on Tuesday, for a sixth consecutive night, even after former education minister, Omar Razzaz, was tasked to form a new Cabinet.

Thousands of protesters flocked to the sit-in at the Fourth Circle carrying banners, flags and placards. In addition to demanding the reinstatement of the bread subsidy and the removal of taxes from essential goods, protesters waved signs urging the government to release individuals detained for protesting at the roundabout.

The protest came a day before Jordanian professional associations carry out a second nationwide strike. Despite some unions calling for its suspension, the Unions’ Council agreed on Tuesday that the strikes would continue until the Income Tax Bill is repealed.

Following major protests across the country, which included burning tyres, His Majesty King Abdullah II ordered the government not to raise the prices of fuel and electricity for the month of June.

Nevertheless, protests continued and demonstrators demanded the resignation of the Cabinet as well as the repeal of the bill leading Mulki to tender his resignation on Monday. Reinstate the subsidy on bread and other essential goods.

I have rented a home next to the #Fourth_Circle Freedom for the detained at the Fourth Circle