Jordan ranked second among Arab states in higher education, or did it? 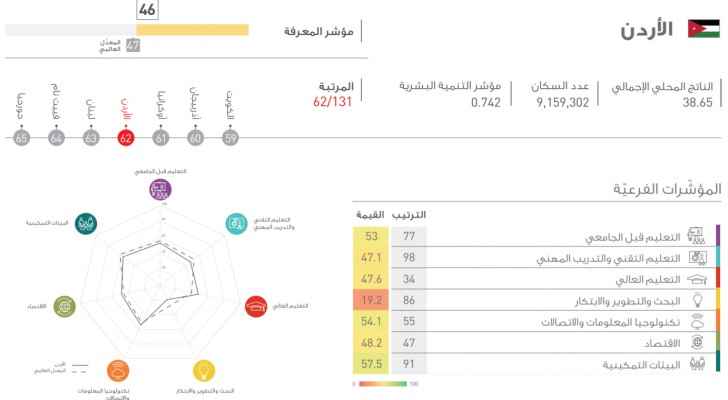 Jordan’s Ministry of Higher Education and Scientific Research recently released an infographic that boasts Jordan’s second place among Arab nations in regards to higher education. The result is based on the 2017 Global Knowledge Index developed by Mohammad bin Rashid Al Maktoum Knowledge Foundation and supported by the United Nations Development Programme (UNDP).

The infographic, titled “indicators on the quality of public services in Jordan,” claims to provide information on the higher education sector and scientific research, even though the index used two seperate metrics for each of those aspects, where Jordan scored half the global average in the second of those. It is vital to point out that the overall index is based on the value of seven sectoral indices: pre-university education, vocational training, higher education, ICT, supporting environment, R&D and Innovation, and economy.

The country ranked on the number one spot globally comes as no surprise in the face of Switzerland, which scored 71.8 on the index.

Jordan scored 46.2 and occupies the 62 position out of the 131 countries evaluated in 2017. The first Arab country on the overall ranking is the UAE, which occupies the 25 spot, followed by Qatar at 41. The third country that precedes the kingdom is Kuwait, which is ranked 59.

Jordan’s ranking in three of the sectoral indices is within the global average including the ministry’s pride- higher education, where Jordan was placed 34 in the world and 2 among Arab states, following the UAE at 27.

Even though Jordan was in the bottom quartile of countries in regards to vocational training at the 98 spot, the country was still within global average. Nevertheless, the kingdom was preceded by the UAE, Lebanon, Qatar, Syria, Kuwait, Morocco and Mauritania in this metric.

Jordan’s economy was the third metric that was also average, as the country scored 48.2, but still came behind the UAE, which was placed second globally after Bahrain and Qatar.

On the other hand, Jordan was slightly above average in pre-university education, ICT and supportive environment.

Jordan’s pre-university education placed the country in 77 place, following Algeria in 76 place, Kuwait in 42 and the UAE at 16.

The final indicator that evaluates Jordan as above global average is supporting environment, where the country is ranked 91 globally.

As for R&D and innovation, Arab countries make their first appearance on spots 36, 37 and 38 with KSA, the UAE and Qatar respectively. Kuwait Algeria, Tunisia, Lebanon, Morocco, Oman, Bahrain also come ahead of Jordan, which occupies the 86 position. The country is way below global average as it scores a mere 19.2 points.

In conclusion, one metric taken out of context may present a country in favourable light but spectacularly fail to paint a realistic picture of the overall state of education. The index uses seven indicators, separating higher education and research in order to present a balanced view.

Jordan ranks second among Arab countries in higher education, true. But would you still feel positive about that ranking after being told that this is still within global average and does not include reflect on the other metrics?