The meeting was held in the Ministry of Public Works and Housing on Tuesday. 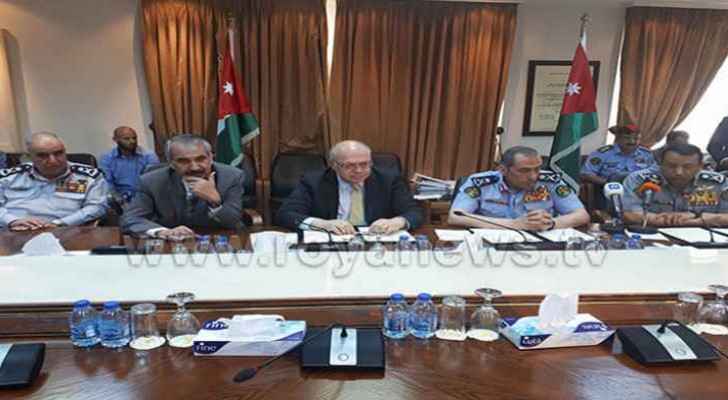 Jordan’s Desert Highway will be supplied with the officers needed to improve safety and equipped with the necessary tools to monitor traffic and provide guidance and protection in all the detours during construction, according to a cooperation agreement signed on Tuesday.

According to Halaseh, the agreement will improve road safety during the roadworks on the highway by providing the necessary radars, patrols and assuring drivers abide by the speed limit. He also added that the teams on the road will respond to emergency and contribute to the overall smooth transition to detours.

The meeting was also attended by Minister of Interior, Samir Moubaidin and Abdullah Khuwaiter, representative of the Saudi Fund for Development.

The construction on the highway began after Jordan and Saudi Arabia signed an agreement last year for the $224 million project funded by the Saudi Fund for Development. Three consortiums are implementing the project, which spans 220 km between Queen Alia airport and Aqaba.

Detours in the highway are due to the constructions that are implemented on five to six kilometre sections in order to avoid disruption. Nevertheless, Jordanian MP Mohammad Amamreh and seven others died in a car crash in a detour near Swaqa 10 days ago.

The highway links the capital of Amman with all the southern governorates, all the way to Aqaba. Government estimates indicate its northern section is used by 30,000 and the southern part by 10,000 vehicles daily.

IMAGES: PSD closes Desert Highway due to lack of ....

IMAGES: PSD closes Desert Highway due to lack of ....