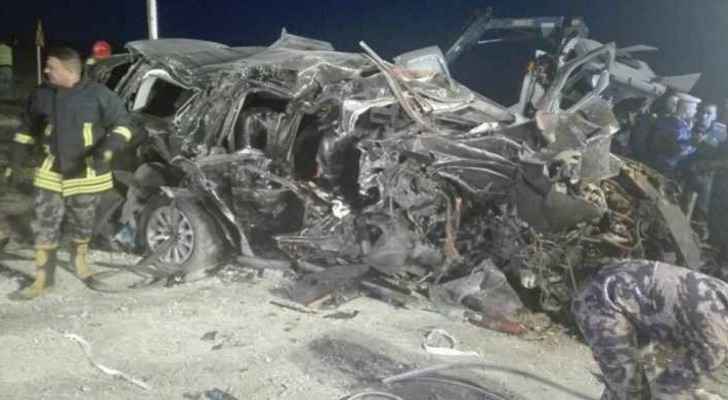 MP Mohammad Amamreh and seven others, including his wife and children, were killed on Saturday evening in a road accident involving the MP’s car and a large winch-truck on a Desert Highway detour near Swaqa, the Civil Defense Department reported.

The two people in the truck were critically injured, after which one of them was subsequently pronounced dead. According to the investigation committee formed by the Central Traffic Department (CTD), skid marks on the road indicated that the horrific accident had occurred due to Amamreh’s sudden change of lanes into the opposite direction, as a result of the rear right tyre detaching from his car.

Many MPs headed to social media to express their grief and condolences to the family, in addition to Speaker of the Lower House, Atef Tarawneh, who expressed his sorrow and postponed the Parliament’s Sunday session to Monday as a sign of mourning, and to allow MPs to attend the funeral.

On Sunday, thousands went to Ma’an to pay their respects at the funeral of the MP and his family. Among them were the Deputy Prime Minister, Jamal Al Saraira, Atef Tarawneh and a number of other MPs.

According to the Parliamentary election law, Saleh Sari Abu Tayeh will replace Amamreh, as he had come in second place in the electoral district of Ma’an.

The Desert Highway, which connects the capital of Amman with the port city of Aqaba, has a horrific record of accidents occurring each year, many of which are fatal. Some critics, including Tarawneh, have described it as a “death road” and called for its reform. One death and four injuries following two collisions on ....

One death and four injuries following ....