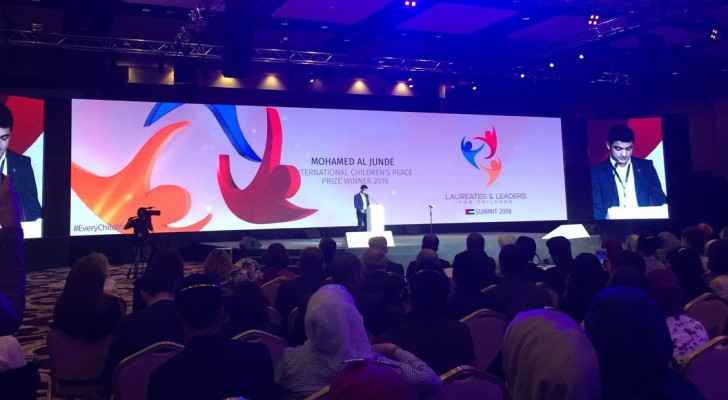 King Abdullah II launched on Monday the second Laureates and Leaders for Children Summit 2018, which took place at the King Hussein Bin Talal Convention Centre at the Dead Sea.

The summit was attended by Nobel Laureate and founder of the Laureates and Leaders for Children movement, Kailash Satyarthi, in addition to President of Panama, Juan Carlos Varela, and the President of the Robert F. Kennedy Human Rights organization, Ms. Kerry Kennedy, as well as more than 250 government officials, youth leaders, academics and civil society representatives from several countries.

Read More: What is the Laureates and Leaders for Children Summit 2018?

This year’s summit will center around protecting children on the move, particularly in light of global forced migrations that are only expected to increase over time.

"International communities have allegedly failed to take concrete action to protect the people of Syria and Yemen. This is the main reason why children are still facing problem there," former UN special envoy to Syria Lakhdar Brahimi said on the sidelines of the summit, Business Standard reported.

The 64-year-old Nobel Prize winner added that "like technology, education and wealth does not require borders, the same way children should not need passport and visa to cross borders. I aim to see that kind of world, where children are let free."

The summit was introduced on Saturday during a press conference held under the patronage of HRH Prince Ali Bin Hussein, who was co-hosting the summit.

The first Laureates and Leaders for Children Summit was held in 2016 and hosted by the President of India, Pranab Mukherjee, in a unique movement that mobilizes Nobel Laureates, youth, celebrities and other leading thinkers and influencers across disciplines and generations who are champions for children.