What is the Laureates and Leaders for Children Summit 2018?

This year, the summit will center around protecting children on the move. (Kailash Satyarthi Children's Foundation) 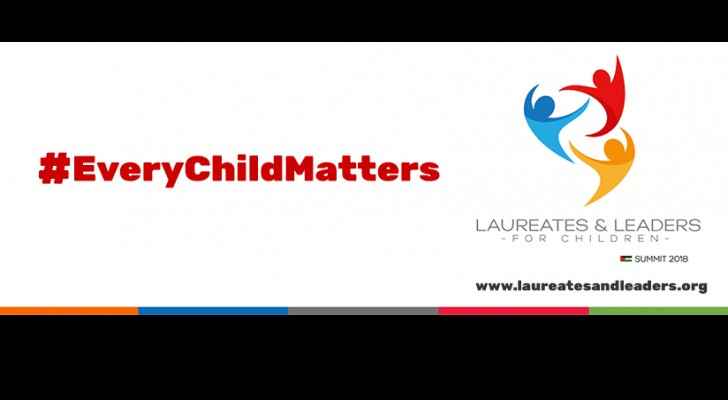 Under the patronage of His Majesty King Abdullah II, the second Laureates and Leaders for Children Summit 2018 will be taking place in Jordan on 26-27 March, 2018, at the King Hussein Bin Talal Convention Centre at the Dead Sea.

The globally-celebrated platform will bring together Nobel Laureates, global leaders, and youth from around the world to deliberate on and develop a plan of action to address the challenges faced by children impacted by forced migration. The aim of the movement is to ensure that every child, including and especially children in the most vulnerable sections of the world are free, safe, educated and healthy.

The summit was introduced today during a press conference held under the patronage of HRH Prince Ali Bin Hussein, who is co-hosting the summit, at the convention centre at the Dead Sea. The event was attended by Nobel Laureate and founder of the Laureates and Leaders for Children movement, Kailash Satyarthi, in addition to the First Lady of Panama Lorena Castillo de Varela and the President of Robert F. Kennedy Human Rights, Ms. Kerry Kennedy.

A still from the press conference at the Dead Sea today. (Roya)

This year, the summit will center around protecting children on the move, particularly in light of global forced migrations that are only expected to increase over time.

“Given the central role Jordan is playing in mitigating the forced migration crisis impacting the region, including hosting the second largest number of refugees per capita in the world, the summit will tackle a number of issues that are relevant to the kingdom’s current reality and future prospects, laying the foundations for viable strategies for addressing those issues,” explained HRH Prince Ali Bin Hussein.

“The most damning indictment of this so called techno-civilized world can be summed up in three stark and savage words: slavery still exists. What is even more shameful is that children constitute a large proportion of modern day slaves,” explained Mr. Satyarthi.

“Children have never been responsible for conflicts, wars natural disaster or any other human tragedy but are the worst sufferers. It is the political and moral urgency to ensure and secure the present and future of every child,” he added.

The Summit will revisit the definition and key drivers of children on the move and in crisis and will examine specific achievable actions to prioritize and protect children from exploitation, trafficking, slavery, abuse and ensure their education.

“Let us raise our voice to guarantee that all children enjoy a life without violence and discrimination,” urged HE Lorena Castillo de Varela.

The first Laureates and Leaders for Children Summit, held in 2016, was hosted by the President of India Pranab Mukherjee. Twenty one Nobel Laureates and world leaders joined 400 distinguished thinkers and influencers from academia, business, entertainment, government and civil society, all committed to working together to prioritize the world’s children in their spheres of influence.

Laureates and Leaders for Children is a unique movement that mobilizes Nobel Laureates, youth, celebrities and other leading thinkers and influencers across disciplines and generations who are champions for children.

The movement was conceived as an engaging platform to establish the groundwork for a more sustainable and forward-thinking leadership capable of safeguarding the future of the world’s children, particularly in the face of global challenges and chronic social predicaments impacting communities worldwide.