Protesters near the 4th Circle in Amman in front of the Prime Ministry. (Roya) 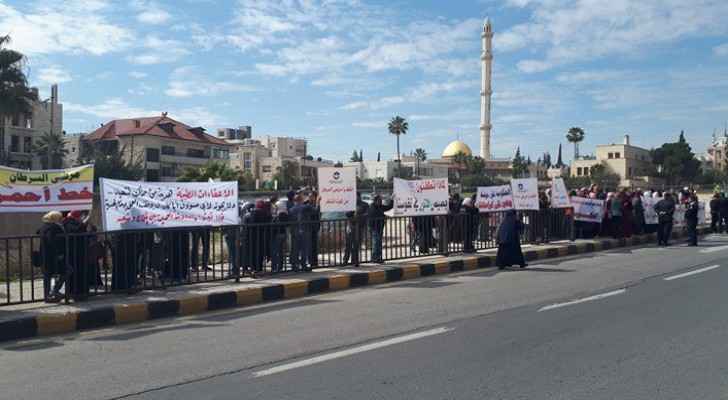 Tens of cancer patients and their families gathered outside the Prime Ministry’s headquarters on Tuesday to protest the government’s recent decision to establish a medical committee that will refer cancer patients to hospitals around the country.

Citizens expressed their concern that free healthcare they receive will no longer be up to standard. Patients will be referred to public, military and university hospitals and not only King Hussein Cancer Centre (KHCC).

Protesters carried banners reading: ‘No to the sale of the center [KHCC], keep it public property”. They called on the government to suspend their decision affirming that free medical treatment in the KHCC is the right of every Jordanian.

Patients taking part in the protest demanded the right to receive decent medical treatment in an internationally accredited medical center, referring to the KHCC. People felt entitled to treatment in the KHCC particularly because private donations and citizens’ efforts in raising funds have helped the center.

Protesters also condemned the latest remarks made by Jordanian Minister of Media Affairs and government spokesman Mohammed Al-Momani describing it as an insincere attempt to defend the government.