The three Lebanese leaders during their meeting in Beirut today. (Aliwaa) 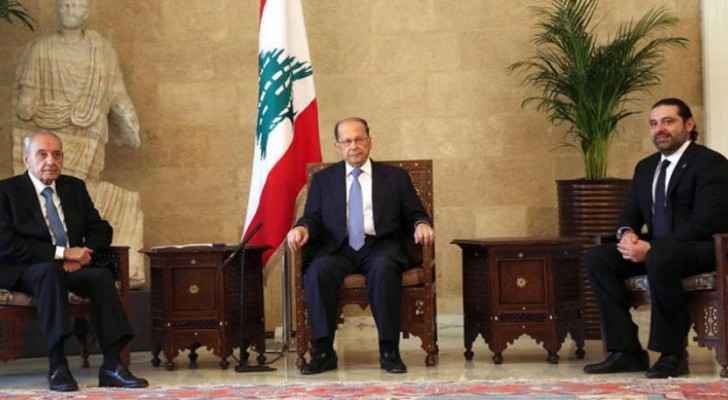 Lebanon has accused Israel of risking the stability of the border region, after the latter threatened to build a wall in their border territories with Lebanon.

Tensions between Israel and Lebanon have recently escalated due to arguments over the wall, and Lebanon’s plans to explore offshore oil and gas in disputed maritime waters.

Israel said the border wall will be built on its territory while the Lebanese claim it passes through the Blue Line UN demarcated as Israel’s withdrawal from southern Lebanon in 2000.

The leaders agreed to act “at various regional and international levels to prevent Israel from building the cement wall...and from the possibility of infringing on Lebanon’s oil and gas wealth and its (territorial) waters,” according to the President’s office statement.They will present a series of measures to Lebanon’s Higher Defense Council and security officials at a meeting on Wednesday, it said.

There is also an 860 sq km unresolved maritime border dispute between Lebanon and Israel. It extends along the edge of three of the five energy blocks of Lebanon’s tender.

The Israeli Defence Minister, Avigdor Lieberman, earlier last week called Lebanon’s offshore oil and gas exploration tender “very provocative” and urged international firms not to participate.
Tension has been kept at bay since the one-month war in 2006 between Israel and Hezbollah that killed around 1,200 people in Lebanon, mostly civilians.