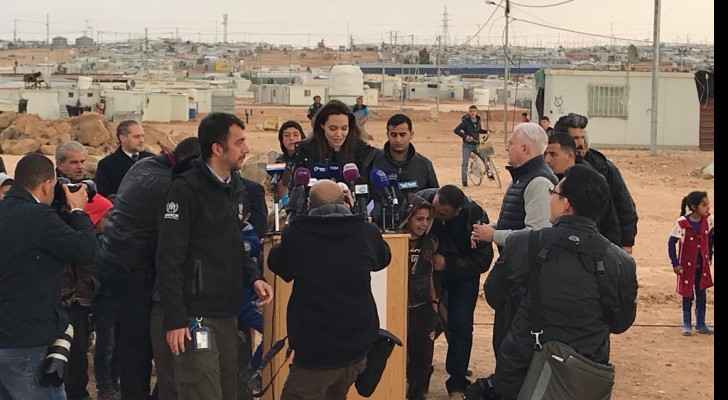 Speaking at a press conference, the UN Envoy said: “After 7 years of war, most Syrian refugees have exhausted any savings they had, vast majority already live below poverty line, on less than 3 dollars a day. Imagine what that would mean for your family.”

“Humanitarian aid is not a long-term solution. And to be clear, no one wants to get off aid relief more than Syrian families. For such an educated, capable people, it is soul-destroying to be made this dependent,” UNHCR Senior Communications Advisor, Rula Amin, quoted Jolie on her Twitter account.

Jolie urged the Security Council members to come to the region to visit the camp, to realize the hard conditions lived by Syrian refugees.

The US actress, filmmaker, and humanitarian, is visiting the Zaatari Syrian refugees’ camp for the fifth time.

During one of her earlier visits, Jolie said: “Over half of all the refugees in Jordan are under 18. My own children are of that age and like any other parent, it is impossible for me to imagine what it would be like for my own children in this situation and it breaks my heart.”

Angelina Jolie was not the only Hollywood star to visit the camp, several stars were part of a campaign to shed the light of the international community on the suffering of Syrian refugees, including the Clooneys, Cate Blanchett, Ben Stiller and Ricky Martin.

The Zaatari refugees camp is currently hosting more than 80,000 Syrians who were forced to leave the war in their country since 2012. More than half of the camp’s residents are children, according to an Oxfam report issued in 2017.It is located 10 kilometres East of Mafraq, which is gradually evolving into a permanent settlement for Syrians who lost their homes in the war.

While Syrian refugees are suffering the lack of sufficient food supplies and better accommodation, the Jordanian government spends an estimated $870 million a year supporting Syrian refugees from the aids and funds the government received.