The Insult and Last Men in Aleppo official posters. 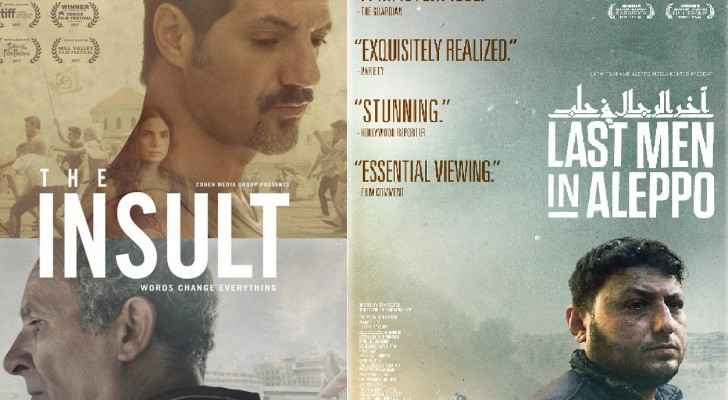 After 2017’s ‘The White Helmets’ won an Oscar award, the Syrian-Danish movie, ‘Last Men in Aleppo’ was officially nominated to the Academy Awards 2018.

Alongside with the Lebanese movie, ‘The Insult’, the two movies became first movies nominated from their countries to the Oscars.

The Syrian-documentary ‘Last Men in Aleppo’ made history as the first Syrian-directed film nominated to the Oscars while its country is torn in a seven-year war.

Firas Fayyad, the director and writer of the film, described the nomination as "a big shout out to justice", as he documented what he called "war crimes" of the Syrian government in his 90-minute documentary.

"They say those who have the power always write history. We who don't have power are now writing history, one that can't be erased," Fayyad told Business Insider.

The film documented daily lives in Aleppo during the Syrian war and it shed lights on the internationally-recognized White Helmets’ search-and-rescue missions, and how they chose to stay in the country and fight for it instead of fleeing.

Last men in Aleppo, the movie about the #WhiteHelmets has nominated for the Oscar2018 pic.twitter.com/vFelpUCflE

Additionally, the Lebanese movie ‘The Insult’ was also nominated to the Best Foreign Language Film category at the 90th Academy Awards.

‘The Insult’ is about a dispute between a Lebanese man and a Palestinian refugee, after the latter tries to repair a drainpipe on in the other's building. The fallout leads to violence, courtroom confrontations, and national attention.

The movie’s Lebanese director, Ziad Doueiri, was praised widely in Lebanon, however; its director was the source of wide controversy over his political anti-BDS views.

While the movie itself was praised in Lebanon widely, the director was the source of wide controversy over his political anti-BDS views.

‘The Insult’ was banned from screening in the Days of Cinema Palestinian film festival in October 2017, after it was set to the closing ceremony.

Earlier also in October, Doueiri was held for three hours in Beirut’s International Airport and was questioned by the police for shooting parts of his award-winning film “The Attack” in Israel, following demands from Lebanese journalists and activists.

He was accused of violating Lebanese law for filming parts of his 2013 film The Attack in Israel, as Lebanon prohibits visiting “enemy territory”.

Lebanon remains officially at a state of war with Israel, and it boycotted Israeli products and banned its citizens from travelling or contacting the Israelis.

While ‘The Attack’ was banned from screening in Lebanon as part of the Campaign to Boycott Supporters of Israel-Lebanon (CBSIL), several movies were also banned lately for Israel-related matters, including Hollywood's director Steven Spielberg's movie ‘The Post’, and another Australian drama movie ‘Jungle’.

Doueiri said in one of his recent interviews to the online publication Forward: "I want to portray people like the BDS in a very negative light ... That's it. I think I have an agenda against them, and I'm gonna probably do it in my next film."

This comes after the Boycott Divestment Sanctions (BDS) movement criticized him for his movies and visits to Israel.