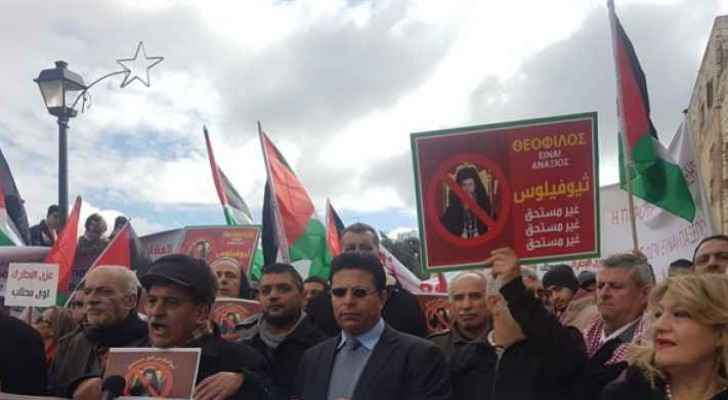 Hundreds of Palestinians protested in Bethlehem, the West Bank, calling on the Greek Orthodox Patriarch Theophilos III of Jerusalem to resign, as he was arriving to celebrate an Orthodox Christmas mass on Sunday midnight.

Protesters blocked his convoy, threw stones and water bottles at his car, while chanting “traitor, traitor”, before security forces pushed them away, triggering clashes.

The Patriarch was supposed to be welcomed in the Manger Square by officials, but none of them were present to welcome him, amid calls from the Orthodox Church to expel him from his position.

Despite all this, the Midnight Mass at the Church of Nativity was led by the Patriarch, with the presence of the Palestinian President Mahmoud Abbas.

Theophilos, the head of the largest Orthodox community in Palestine, is accused of selling church property to Jewish developers and settlers, since the Greek Orthodox Church is one of the largest real estate owners in Israel and Palestine.

Protests against the Patriarch started in early August 2017, when an Israeli court ruled over the selling of two hotels near Jaffa Gate in the Old City, and a large building in the Muslim Quarter to the Israeli Jewish settler group that aims to expand the Jewish presence in the occupied city.

Palestinians accused the patriarch of betraying the church’s responsibility to protect Palestinian lands that were handed under its care during the Ottoman period.

Protesters blocking the convoy of Patriarch Theophilos III of Jerusalem in Bethlehem.

Clashes between protesters and security forces.

Meeting of the World Council of Churches kicks off in ....

Meeting of the World Council of Churches kicks ....

Meeting of the World Council of Churches kicks ....

Meeting of the World Council of ....