Meeting of the World Council of Churches kicks off in Amman

The World Council of Churches will meet in Amman. (Wikimedia Commons) 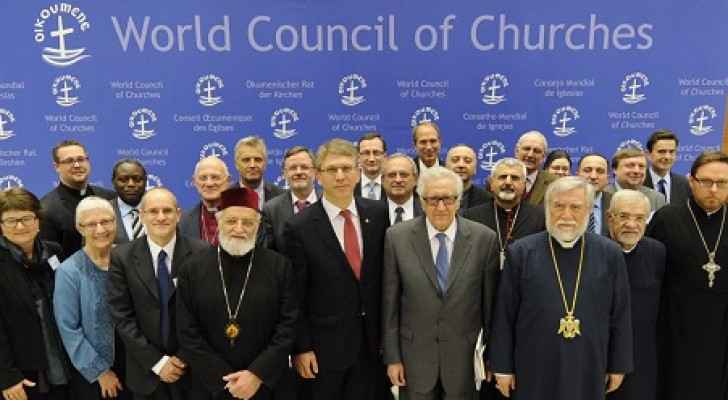 The Meeting of the World Council of Churches' Executive Committee will kick off in Amman on Friday, with the participation of 42 heads of churches in the world.

The meetings, held by the Patriarch of the Holy City of Jerusalem, Theophilos III, will focus on Christian holy sites in Jerusalem. The six-day meeting will also review a number of issues of concern to churches around the world and challenges facing them due to wars and conflicts, especially in the Middle East.

The World Council of Churches is a worldwide inter-church organization founded in 1948, with members including the Assyrian Church of the East, the Oriental Orthodox Churches, the Eastern Orthodox Church, the Old Catholic Church, and most mainline Protestant churches, among others.

The meeting comes as Patriach Theophilos finds himself at the centre of controversy, following allegation that he had sold church-owned land in Jerusalem to Israeli developers.

Earlier this week, the Arab Central Orthodox Council in Palestine and Jordan issued an official statement condemning the Greek Orthodox Patriarchate’s justifications about the deals.

“Such deals will help Israel in Judaising the Palestinian lands in Jerusalem, to displace Christian Arabs from their lands and execute Israel plans to evacuate all eastern Christians (Orthodox) and steal their history,” the council said.

“We are following all distortive attempts by the Patriarch which affects Arab Orthodox Committee in Palestine, considering Israel are applying their racist policies against Orthodox Arabs who are calling for reforms and justice to save holy sites in Jerusalem,” the statement said.

Jordanian Sergeant martyred while on ....