An image showing the change of the metro station name. (rassd.com) 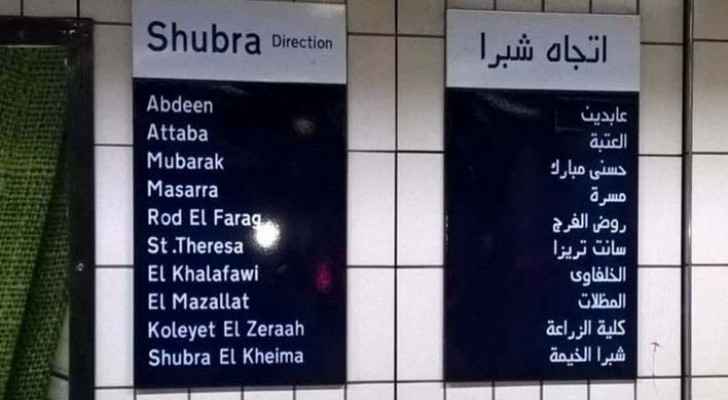 Controversy raised among Egyptians on social media after images showing the iconic Cairo metro station restoring its name 'Mubarak' after it was named 'Al-Shuhada' (Martyrs).

The metro station name was changed after the 2011 Egyptian revolution, from ‘Mubarak’, the name of the ousted President, Hosni Mubarak, to ‘Martyrs’, after the martyrs’ of the revolution.

The Metro Station Authority released a statement saying an anonymous people had placed posters on the real name of the station ‘Martyrs’, replacing it with ‘Mubarak’.

“They took photos for it, for the purpose of causing chaos”, the statement said.

“Sadat Metro Station had removed those posters, and we informed the subway police to investigate the case through surveillance cameras in the station,” Ahmad Abdel Hadi,r the metro station spokesperson said

“The company does not violate law, and we executed a judicial decision by the Administrative Court in 2011, to replace Mubarak’s name with Martyrs”, he added.

Since the metro station was opened in 1989 by the ousted President’s presence, Hosni Mubarak, it was named after his name.

This was the case before 2011 revolution, when an judiciary decision carried out in April 2011, ordering to remove Mubarak’s name and any name related to his family from any public premise.

Here are some of the images shared on social media showing the change in the metro station name:

The iconic #Cairo metro station that changed its name from 'Mubarak' to 'Al-Shuhada' (Martyrs) after the 2011 Egyptian revolution, has had its old name restored back to "Mubarak". And that folks is how a counter-revolution seeps its tentacles through the pores of public spaces. pic.twitter.com/rksgLyV94k