Karama HRFF will start on Tuesday in Amman. 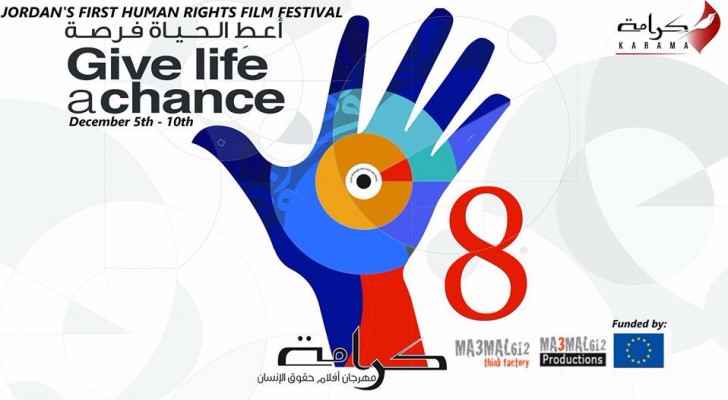 For the next five days, Amman is hosting the 8th edition of the Karama Human Rights Film Festival (HRFF).

The festival will start from December 5 until December 10, and this year’s theme is ‘Give Life a Chance’.

“In our 8th edition, we shall give life a chance through cinema to plant the seeds of hope in our youth in times of despair and constant social and political conflict. Through our festival, we opt to offer hope that affirms our dream of a better life,” Karama HRFF wrote on their website.

The festival will screen human rights films from Jordan and across the world, including Kazakhstan, Egypt, Ukraine and the UK.

The opening film will be the French film ‘Rabih’, produced in 2016, and will be attended by the main stars of the film.

The festival will include many other related events, including discussions and debates with some of the producers, in addition to seminars, workshops, and the ‘MusiKarama event,’ which entails musical concerts and dance performances.

“Our aim is to advocate for human rights, invite debate, encourage critical thinking and civic engagement, and open democratic dialogue about human rights issues among the various international, regional and local institutions and organizations, and the wider public,” Karama HRFF stated.

The festival is attended by around 8000 attendants from different fields every year.

Karama Human Rights Film Festival has branched out to three other festivals outside of Jordan: Gaza, Mauritania and Beirut, and it is organized by Ma3mal 612 Think Factory, every year.

For more information on the festival, visit the official website of Karama Human Rights Film Festival.

And for more information about films screenings, the events places and times, visit the event’s Facebook page.