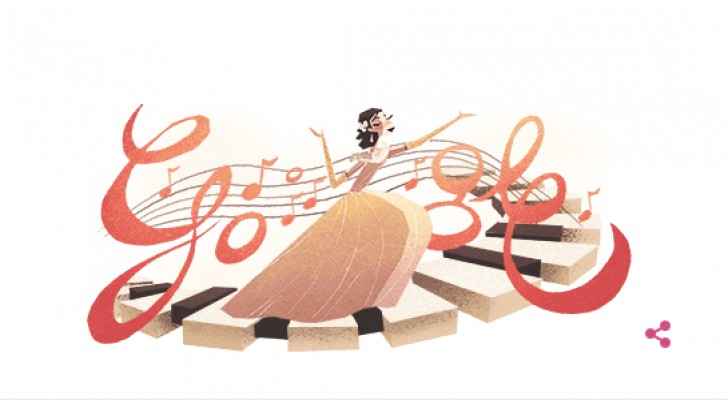 Egyptian iconic opera singer Ratiba El-Hefny would have celebrated her 86th birthday today - Google marked the occasion with one of their famous Doodles.

Ratiba, whose mother is of German descent, grew up in a musical family; her mother was also an opera singer and her father wrote more than 45 books on music.

At the age of five, Ratiba started playing the piano. She also learned to play the oud and qanoun.

Despite reaching the level of concert pianist, Ratiba told Al Ahram in 2013 that she was more interested in singing and in Arabic music.

Ratiba was the first person to establish a children’s choir in Egypt (1960s). She later founded the Cairo Opera Children's Choir and Um Koulthum Ensemble for Arabic Music and the National Arab Music Ensemble.

While aspiring artists received the best education possible in their fields in Egypt during the 1950s and 1960s, Ratiba was the first Egyptian opera singer to receive a diploma from an international music institution, after she earned her degree in operatic singing in Munich and folkloric arts in Berlin.

The multi-talented artist was appointed as the first chairperson of the Cairo Opera House when it was inaugurated in 1988. She was also the president of the Arab Society for Music, an adjunct organisation to the Arab League.

Ratiba is one of very few artists who master Arabic and Western music with equal skill.

After performing in more than 500 opera performances and assuming several teaching roles, Ratiba looked back at her career with satisfaction, as she told Al Ahram in 2013:

"I am very proud of my many decades of artistic achievements. I think I managed to realise all my dreams and say all that I wanted to say. I stepped down from the stage at the peak of my operatic career. A major reason behind this decision was the withdrawal of Hassan Kami and Sobhi Bedeir from operatic singing.

"They were always singing with me; they were my partners in many roles. When they stopped performing in operas I was thinking who my new partner could be. Many new singers were very young and though they were talented, I didn't feel we would make suitable duets.

“I also recalled the words of Mohammed Abdel Wahab: 'An intelligent artist leaves the artistic path while still at the top.' This way people can still remember the artist's best roles instead of witnessing the natural deterioration in vocal abilities that come with age."

Woman killed after being robbed in ....

Which iconic Egyptian Poet is Google ....