British PM May to visit Jordan for second time this year 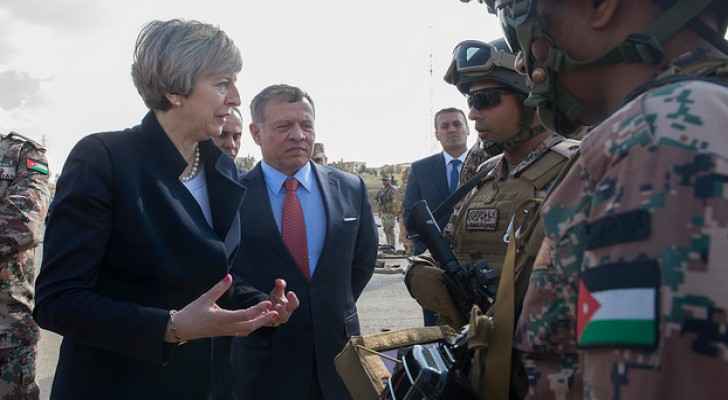 British Prime Minister Theresa May will visit Jordan on Thursday on the second leg of a Middle East trip, as she seeks to strengthen defence and trading links in the region.

On Wednesday, May will meet with Saudi Crown Prince Mohammed Bin Salman to discuss the ongoing humanitarian crisis in Yemen, Saudi’s stand-off with Qatar, and the Gulf kingdom’s radical programme of social and political reforms.

The following day she will travel to Jordan for the second time this year to meet with King Abdullah II and Prime Minister Hani Mulki to discuss regional security and support for Jordan’s economy.

“We need to ensure that we’re building stable partnerships to ensure our security, and there’s no doubt in my mind that it’s in Britain’s national interest to work with Jordan and Saudi Arabia,’’ May told reporters.

“It’s in their security interests but also in ours. We want to help them to address regional challenges but also to put through the reforms that they have to ensure their long-term stability.’’

Her trip comes at a tricky time for Britain as it negotiates its exit from the European Union one year from now.

The Prime Minister will be keen to forge new trade links to replace the ones it will lose after Brexit, and to show that Britain remains a key player on the world stage.

"This visit demonstrates that as the UK leaves the EU we are determined to forge a bold, confident future for ourselves in the world," a spokesman for May said.

May has supported the recent economic and social reforms pushed through by Saudi Arabia’s powerful Crown Prince, who arrested scores of rivals in an unprecedented anti-corruption campaign.

Bin Salman “is somebody who has a very clear vision,” May said. “We’ve already seen some changes taking place in Saudi Arabia, for example women being allowed to drive. It’s important that we work with him”.

The prime minister will also bring up Saudi Arabia’s blockade of Yemen, where it is fighting Houthi rebels, which has been widely condemned for contributing to a humanitarian crisis as the country heads towards widespread famine. “We’re very concerned about the humanitarian situation in Yemen,” she said.