Meet Asim Hafiz, the Imam serving in the British Army

Imam Asim Hafiz, the Islamic Religious Adviser to the Chief Defence Staff at the UK Ministry of Defence. (Ro'ya) 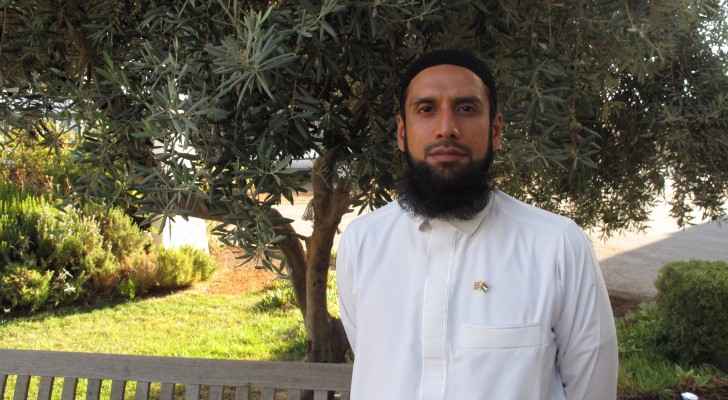 “I think half the world’s problems are down to ignorance and being unaware, having misunderstanding.” It is this perception that drives the work of Imam Asim Hafiz, the first Muslim chaplain to the British army, who last week visited Jordan for meetings with the Jordanian Armed Forces.

Now working as the Islamic Religious Adviser to the Chief Defence Staff at the UK Ministry of Defence, Hafiz sits in the manicured gardens of the British embassy in Amman, contemplating his ten years as an Imam in the British army.

With British involvement in Afghanistan and Iraq, two Muslim majority countries, many perceive Hafiz’s job as seemingly conflictual in nature. “I had some Muslim clerics who said it was wrong for me to join the armed forces, because Britain was at war in countries that happened to be Muslim,” he tells Ro’ya.

On the other side of the spectrum, Hafiz says there were sceptics who believed that his faith meant he could not be trusted, asking “Why are the armed forces giving a Muslim access to their secure sites?”

However, these loud and varied opinions did little to deter Hafiz, whose work has seen him act as a cultural bridge between the British army and the various Muslim communities they engage with overseas.

Hafiz says that this was made clear to him during his deployment to Afghanistan, where he saw that despite misconceptions, both sides were ultimately striving towards the same goal of peace.

“From the senior commanders, what I was being told, is that this better understanding will help us prevent the escalation of violence rather then promote it.”

Joining the British army during a time when the so-called Islamic State and other Islamic extremist groups were gaining momentum in the Middle East, Hafiz also saw his job as an important opportunity to be an educator of the Islamic faith and to work against the exploitation of Islam for political gain.

“So to be that sounding board for defense, but also using this role as a means to communicate with the Muslim community, was an important way for me to serve my faith and my country.”

However, despite such efforts, Britain's involvement in Iraq and Afghanistan has been controversial, with critics claiming Western interference only encouraged Islamic extremism and the popularity of the Islamic State and Taliban.

When questioned about this, Hafiz remains perfectly diplomatic in this response, emphasising the various ways in which the British forces were able to help, and the positive values by which they stood. He feels the army are often unfairly attacked by the mainstream media, their failures magnified and victories overlooked.

Alongside this, Hafiz goes back to his point on the destructive nature of ignorance, underlining his belief that it was the misrepresentation of British intervention, as opposed to the reality, that may have fuelled support for Islamic extremist groups in Iraq and Afghanistan.

“There is this perception that Britain went to Afghanistan to kill Muslims and destroy Islam, and its not true. And it’s elements of certain parts of the community that want to promote that kind of misinformation that encourages radicalization, not just the fact that Britain went to Afghanistan or Iraq to get involved on the basis of which the government at the time decided.”

It is this misinformation that Hafiz is battling against, and he has now taken his work to Jordan where he is searching for ways in which the British and Jordanian armed forces can work together within this regard.

He has met with Mufti Majed Darwsheh, from the Jordanian Armed Forces, with the two religious leaders discussing ways to address and challenge Islamic extremism in the region. While there are no concrete plans at the moment, Hafiz says they are exploring the various opportunities in which they can engage with each other and promote better understanding.