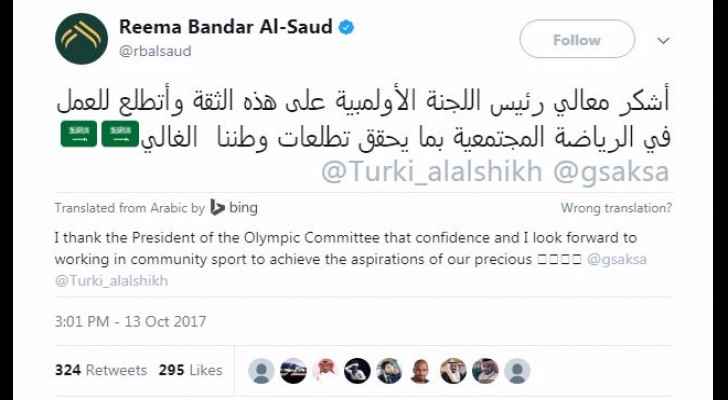 The Saudi Arabian government had decided to appoint Princess Reema bint Bandar bin Sultan to be the first female president of a sport federation, according to Khaleej Times.

Turki Bin Abdul Mohsen Al-Asheikh, the Chairman of the General Authority for Sport and the Saudi Arabian Olympic Committee, announced the decision in another step forward for women in Saudi Arabia to be in positions that manage activities for both men and women.

Bint Bandar, who is the daughter of the former Saudi Arabian ambassador to Washington, was selected for the role as part of the extensive reform in the Olympic Committee. She holds a bachelor's degree from George Washington University.

In addition to being a successful entrepreneur, she led a breast cancer awareness campaign in the Kingdom and serves as vice president at the General Authority of Sports.

Official sports in Saudi Arabia have been reserved almost exclusively for men, however several reforms have been made over the last few years, paving the way for women.

Earlier this year, it was announced that women’s gyms and female only fitness centers would be allowed in the Kingdom. However, women in the kingdom are still not allowed to practice sport in public or take part in competitive sport.

Thousands of women demand abolishment of 'fit of fury' ....

Thousands of women demand abolishment of 'fit of ....