Iraqi Kurds fly an Israeli flag and Kurdish flags during an event to urge people to vote in the upcoming independence referendum. (AFP) 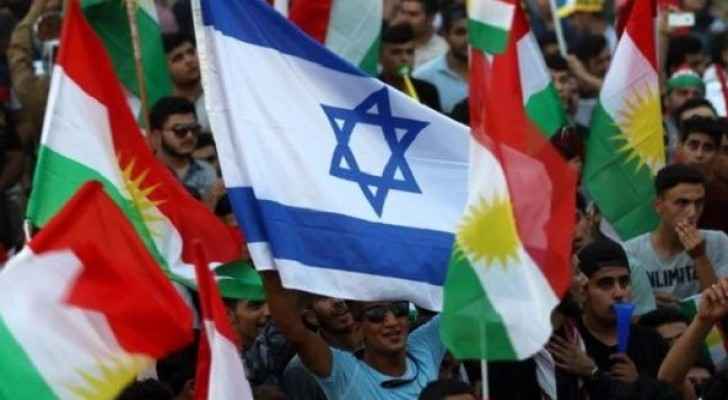 "Israel played no part in the Turkish referendum, aside from the natural, deep and long-standing sympathy the Jewish people have for the Kurdish people and their aspirations," Netanyahu said at the start of the weekly government meeting on Sunday, Haaretz reported.

He added that he understands why "those who support Hamas tend to see the Mossad" where it suits them, in a jab at Erdogan.

Netanyahu was the only leader to endorse an independent Kurdistan, saying that Israel "supports the legitimate efforts of the Kurdish people to achieve a state of their own."

On Saturday Erdogan said that the fact Israeli flags were waved during events celebrating the "yes" vote proves Israel's involvement in the referendum.

"This shows one thing, that this administration [the Kurdish leadership in northern Iraq] has a history with Mossad, they are hand-in-hand together," AFP quoted Erdogan saying.

A similar sentiment was expressed by Lebanese group Hezbollah, with Sayyed Hassan Nasrallah warning that the referendum is part of a U.S.-Israeli plot to carve up the region and will lead to “internal wars”.

The outcome of Monday’s referendum showed an overwhelming 92% of Iraq’s Kurds backed independence.

With 92 percent voting "yes," Iraq's Kurds overwhelmingly backed independence in Monday's referendum, neighboring countries are concerned that the vote could fuel Kurdish separatism within their own borders and lead to fresh conflict.