Iraq forces battle IS in Mosul after PM fetes 'victory' 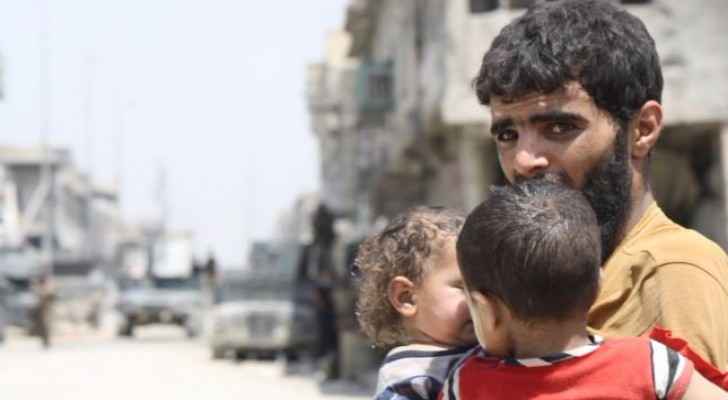 Iraqi forces battled the last so-called Islamic State group holdouts in Mosul on Wednesday, a day after the country's premier feted the "major victory" over the jihadists in the northern city.

In neighbouring Syria, US-backed forces gained ground after air strikes by the international anti-IS coalition punched holes in the wall of the Old City in Raqa, where they are waging a parallel offensive against the jihadists.

"We took control of more than 200 metres (yards) today and there are less than 200 metres remaining toward the Tigris River," Hussein said, referring to the waterway marking the eastern edge of remaining IS-held territory in the city.

More than eight months since the start of the operation, IS has gone from fully controlling Mosul to holding a limited area in the Old City on its western side.

But Iraqi troops in Mosul have faced tough fighting and a spike in suicide bombings in recent days, commanders have said.

The jihadists "are using a new strategy in which they wait inside houses and when the soldiers enter the houses they fire bullets or blow themselves up," Hussein said.

The body of a woman said to have been suicide bomber shot before she could blow herself earlier in the day lay in the street near the house where the officer spoke.

Decaying corpses gave off a stench of death that permeated some streets, and a pool of half-dried blood spread out from the door of one house.

Streets were strewn with clothing and other objects left by civilians who were fleeing the fighting.

"The enemy is not a regular army," said Brigadier General Nabil al-Fatlawi, a CTS commander.

"It's a street to street battle," said Fatlawi, who expects the battle to be over in "a few days".

Despite the ongoing fighting, Prime Minister Haider al-Abadi congratulated Iraq's people, security forces and the Shiite religious leadership "on the achievement of this major victory in Mosul" in remarks broadcast Tuesday night.

But automatic weapons fire and explosions on Wednesday made clear that the final stage of the battle for the city was not yet over.

Iraqi forces launched the operation to retake Mosul on October 17, advancing to the city, recapturing its eastern side and then setting their sights on its smaller but more densely populated west.

The US-backed Syrian Democratic Forces -- an alliance of Kurdish and Arab fighters -- have been battling IS in Syria, and made gains Wednesday in their drive to retake Raqa from the jihadists.

"The SDF advanced and captured the strategic Saif al-Dawlah road leading towards the Old Mosque," said Nuri Al-Mahmoud, a spokesman for the Kurdish People's Protection Units (YPG), which makes up a bulk of the SDF.

The Syrian Observatory for Human Rights monitoring group said the SDF had pushed forwards about 200 metres (yards) by midday (0900 GMT) on Wednesday.

"They are now approximately 300 metres (yards) from the Old Mosque -- within firing range of it," said Observatory head Rami Abdel Rahman.

Syria's civil war provided fertile ground for IS, which seized territory in that country and also overran large areas north and west of Baghdad.

The jihadists have since lost significant ground, but the recapture of Mosul and Raqa will not mark the end of the war against IS.

IS holds other territory in both countries, and is expected to revert to its insurgent roots in Iraq, carrying out bombings and hit-and-run attacks that were its hallmark in past years.