Abducted priest seen alive as Islamists hold out in Philippines

Hundreds of gunmen flying the black flag of the Islamic State (IS) group occupied parts of Marawi on May 23. 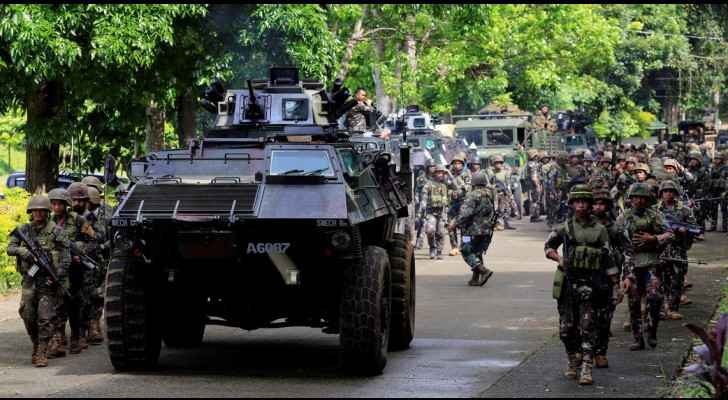 A Roman Catholic priest abducted by Islamist militants who seized parts of a southern Philippine city has been seen alive, the military said Monday, as troops pressed on with their offensive.

Air and artillery bombardment of enclaves occupied by the militants in the largely Muslim city of Marawi resumed after an eight-hour truce Sunday to allow residents to celebrate the end of the Ramadan fasting month.

Hundreds of gunmen flying the black flag of the Islamic State (IS) group occupied parts of Marawi on May 23, triggering bloody fighting that has claimed nearly 400 lives according to an official count.

Father Teresito "Chito" Suganob, a Catholic priest assigned to Marawi, was taken hostage along with some parishioners early in the siege.

Herrera, spokesman for the military forces in Marawi, said the priest had been seen alive on Sunday in a part of the city still in the hands of the extremists.

"We don't have details of his health. We were just told that he was sighted alive," he told reporters, citing accounts from civilians rescued from the battle zone.

He also said there were about 100 civilian hostages still in the hands of the gunmen, being used as "human shields", ammunition carriers and stretcher-bearers.

Fighting resumed with renewed fury on Monday, with government fighter jets and other aircraft seen carrying out bombing attacks.

"Our offensive operations have resumed and will continue so we can liberate Marawi at the soonest time possible," Herrera said at a news conference in Marawi.

He said the bodies of two militants believed to be from the Middle East because of their physical features were found at the scene of an earlier airstrike, another sign that foreign fighters had joined the battle.

"These foreign terrorists involved in the hostilities are bomb experts. They are the ones facilitating the rigging of the buildings and houses with bombs," Herrera said.

Eight foreign fighters, including those from Chechnya, Indonesia and Malaysia, were killed in the early days of the battle, the government has said.

Herrera said they were still trying to confirm reports that Isnilon Hapilon, a veteran Filipino militant said to be the leader of the Islamic State group in Southeast Asia, had escaped Marawi despite a military and police cordon.

An attempt by troops to arrest Hapilon in Marawi on May 23 triggered the rampage by the militants.

Hapilon was indicted in Washington for his involvement in the 2001 kidnapping of three Americans in the Philippines. He has a $5 million bounty on his head from the US government and is on its "most wanted" terror list.

Lebanese militants blow themselves up ....