Some 300,000 worshippers from Palestine and abroad prayed overnight at the holy site. 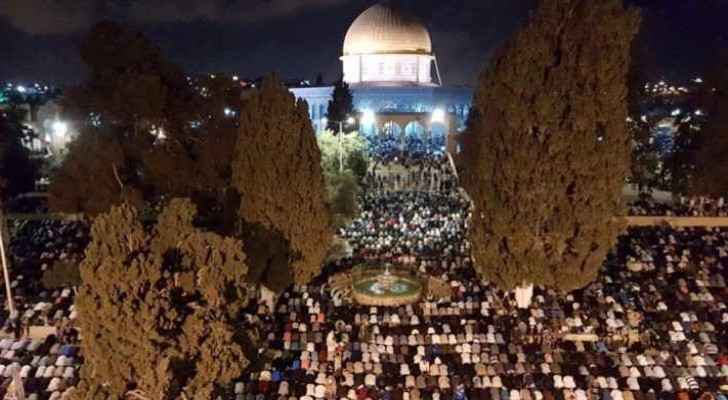 The holiest night in the Muslim calendar, Laylat al-Qadr, was marked by thousands of Muslims in Jerusalem’s Al -Aqsa Mosque on Wednesday.

Some 300,000 worshippers from Palestine and abroad prayed overnight at the holy site.

Visitors from countries including Jordan, Malaysia, France, Turkey, the UK, Indonesia and France travelled to Israel to pray at Al-Aqsa, according to the Jordan-run Islamic Waqf department.

On the same day, Israeli forces deployed policemen all over Jerusalem and closed off roads leading to the Old City of Jerusalem, where the sacred mosque lies.

Israeli authorities also banned worshippers from the West Bank below the age of 40 from entering Jerusalem to attend the special prayers, while allowing those between the ages of 30-40 to enter using a special permit.

Laylat al-Qadr (Night of Power) falls on the 27th night of Ramadan. It retains a special place in Muslims’ hearts because it is the night the holy Quran was revealed to Prophet Muhammad, and God is said to be abundantly merciful on that night.