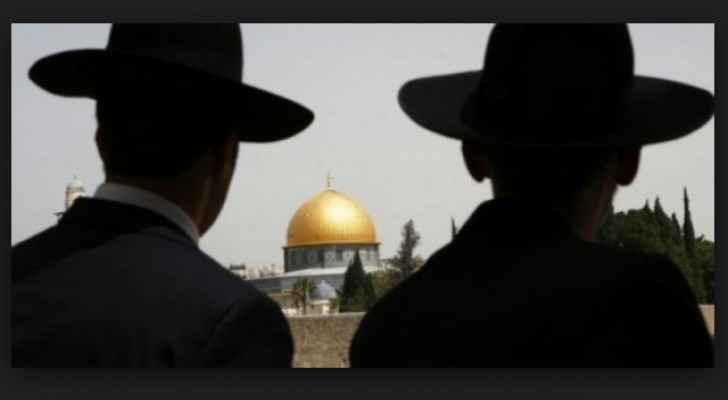 The settlers entered the compound under the protection of Israeli police, who let them in at 7:30am through the Mughrabi Gate, the only entrance for non-Muslims into the compound.

By 11am, when police closed the gate, there were 63 settlers and 108 students on site, according to the Department of Islamic Endowments’ Media Coordinator, Feras al Dibs.

During their incursion into the compound, the settlers were given a tour of various parts of the Al Aqsa Mosque, which included a historical briefing of the Temple Mount, al Dibs said.

Meanwhile, Israeli officers continue to temporarily confiscate many Palestinians’ ID cards before they are allowed to enter through the Mughrabi Gate.

Khalil Tufakji, a Palestinian geographer in Jerusalem and director of the Arab Studies Society’s mapping department, which monitors settler activity, said that “step by step, Israel is finding ways to take over Al-Aqsa.”

He told Al Jazeera: “Israel is sending a message to the Palestinians and to Jordan [whose officials formally oversee the site] that ‘Al-Aqsa is no longer yours. We can enter and we can do as we please there’.”

Right-wing Israeli incursions into Al Aqsa mosque was one of the main catalysts behind the unrest that began in October 2015.

The compound, which is located just above the Western Wall plaza, houses the Dome of the Rock and Al Aqsa Mosque.

While Jewish visitation is permitted on the compound, non-Muslim worship is prohibited in accordance with an agreement signed between Israel and Jordan following Israel’s annexation of East Jerusalem in 1967.

Despite the agreement, Israelis often allow Jewish visitors to worship on the site, often under armed guard. This usually coincides with restrictions on Palestinian access to the mosque, often resulting in clashes between Israeli forces and Muslim worshipers.