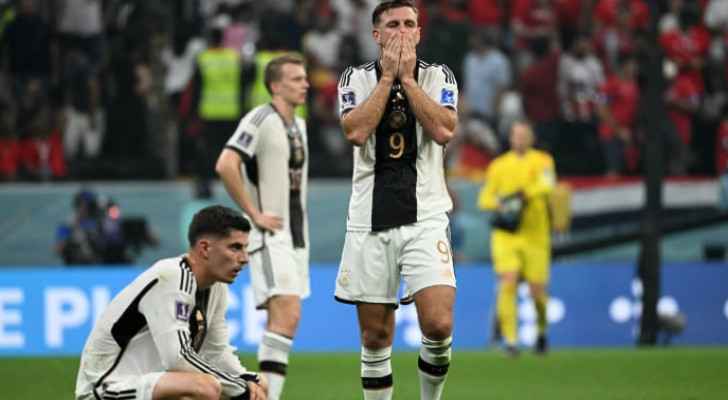 Jordanians took to Twitter Saturday to mock the elimination of the German national football team from the World Cup 2022.

Two hashtags, ‘DieMannschaft’ and another Arabic hashtag ‘MontakhabAlShawath’ which translates into ‘the gay team,’ topped the list of trending hashtags on Twitter in Jordan after Germany was knocked out of the World Cup after the extraordinary finale to Group E.

A social media user wrote on Twitter, "The best thing is that the German team was knocked out, waiting for the rest of the gay teams [to be knocked out]."

Another user said, "To the dustbin of history, a shame that will follow you, enemies of purity."

A user wrote, "When you defend a lost cause, you lose what you have and what you owe."

Earlier, Germany’s football players covered their mouths during a team photo before their World Cup opener against Japan in protest against FIFA’s ban on LGBTQ+ armbands. Germany was one of seven nations banned by FIFA from wearing the “One Love” armbands.

On Nov. 21, 2022, FIFA banned captains of seven European teams from wearing “OneLove” armbands at the World Cup in Qatar.

FIFA had also threatened disciplinary action in the form of a yellow card to players who wear the band.

This came after FIFA’s announcement that they are going to book captains if they broke the rules.

The teams said in a joint statement on Monday, “FIFA has been very clear that it will impose sporting sanctions if our captains wear the armbands on the field of play.”

“As national federations, we can't put our players in a position where they could face sporting sanctions including bookings, so we have asked the captains not to attempt to wear the armbands in FIFA World Cup games.”

The statement continued, “We were prepared to pay fines that would normally apply to breaches of kit regulations and had a strong commitment to wearing the armband. However, we cannot put our players in the situation where they might be booked or even forced to leave the field of play.”

They expressed their frustration following FIFA's decision. FIFA also offered its own compromise in the form of an armband with the slogan "AntiDiscrimination."

Notably, the One Love armband was designed as part of a campaign that began in the Netherlands to promote inclusivity and diversity in football and society.

The armband’s symbol is a heart-shaped multi-colored logo associated with the 'pride flag' which is reserved for LGBTQ+.

On Thursday, Germany crashed out of the World Cup at the group stage for the second time in succession despite a 4-2 win against Costa Rica.

The four-time World Cup winners came into the match needing a win but were also relying on the result of Japan's game with Spain to progress.

But the Germans were eliminated from Group E due to goal difference as Japan followed up their defeat of Germany with another shock result by beating Spain 2-1.

The World Cup kicked off in Qatar on Sunday.