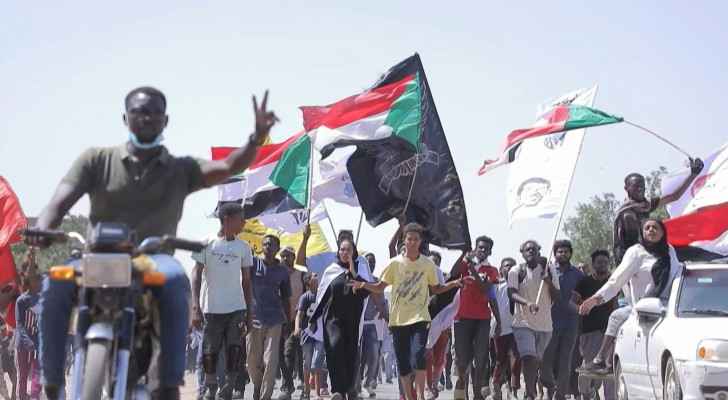 Sudanese security forces shot tear gas Tuesday as thousands of pro-democracy protesters marked the first anniversary of a coup that derailed a transition to civilian rule and sent hunger and inflation soaring.

Waving Sudanese flags, thousands of demonstrators in Khartoum and its suburbs defied security forces who have carried out deadly crackdowns on past rallies, demanding that "soldiers go back to the barracks".

"No partnership, no negotiation with the putschists," protesters chanted, calling out what has become a pro-democracy rallying cry.

A year ago to the day, army chief Abdel Fattah al-Burhan seized power and arrested the civilian leaders with whom he had agreed to share power in 2019, when mass protests compelled the army to depose one of its own, long-time autocrat Omar al-Bashir.

Protesters, calling out that the "revolution continues", have demanded the creation of "a civil democratic Sudan".

Eyewitnesses said thousands also took to the streets in the cities of Wad Madani and El Obeid south of the capital, Gedaref and Port Sudan in the east, Atbara in the north and Nyala in the southwestern Darfur region.

The authorities in Khartoum ordered all public institutions, schools, and businesses shut Tuesday, as security forces blocked roads and bridges.

For a year, near weekly anti-coup protests have been met with force, most recently on Sunday when a protester was killed by a bullet fired by security forces, according to pro-democracy medics.

At least 118 people have been killed while demanding a return to civilian rule, a condition for Western governments to resume crucial aid they had halted in response to the coup.

Cut off from such aid, Sudan -– already one of the world's poorest countries –- has plunged into a worsening economic crisis.

Between three-digit inflation and chronic food shortages, a third of the country's 45 million inhabitants suffer from hunger, a 50 percent increase compared to 2021, according to the World Food Programme (WFP).

The cost of food staples has jumped 137 percent in one year, which the WFP says has forced Sudanese to spend "more than two-thirds of their income on food alone, leaving little money to cover other needs".

Many worry that three years after the 2019 uprising that toppled Bashir, signs point to a reversal of their revolution.

Since the coup, several Bashir-era loyalists have been appointed to official positions, including in the judiciary, which is currently trying the former dictator.

Burhan's pledge of elections next year is seen as far-fetched, no civilian leaders have taken up the mantle of the army chief's promised civilian government, and international mediation efforts are stalled.

"Sudan doesn't have the luxury of zero-sum games and political maneuvers," UN envoy to Sudan Volker Perthes said Saturday. "All political actors need to put aside differences and focus on the best interest of the Sudanese people."

On Friday, 31 protesters were injured, including three who were hit in the eye by tear gas canisters, according to pro-democracy medics.

Western embassies on Monday urged security forces "to refrain from using violence against protesters and to fulfill their obligation to protect freedoms of expression and peaceful assembly".

A broader security breakdown nationwide has also left nearly 600 dead and more than 210,000 displaced as a result of ethnic violence this year, according to the United Nations.

Sudan is the world's fifth most vulnerable country to the impacts of climate change, according to a 2020 ranking in the Global Adaptation Index, compiled by the Notre Dame University in the United States.

More than two-fifths of people depend on farming for a living in Sudan, and conflicts regularly erupt as pressure mounts around access to land, water and livestock grazing.

In the southern Blue Nile state, an area awash with automatic weapons after decades of civil war, some 250 people were killed in intense clashes between rival groups over land last week, the UN said.

Millions at risk of hunger in South ....