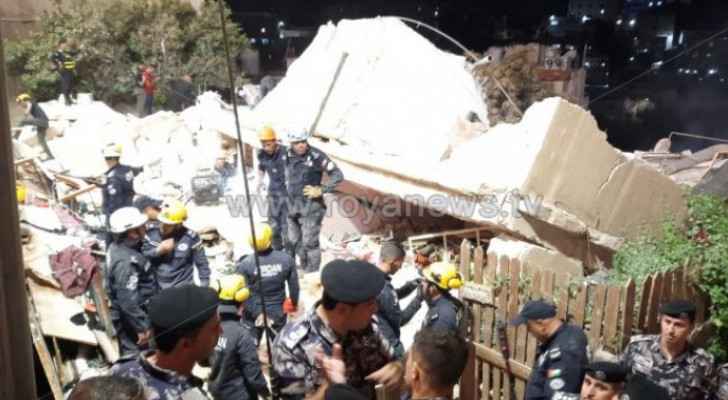 Families who were affected by the collapse of a building in Al-Weibdeh area in Amman will be secured with temporary apartments and household needs, said the Minister of Social Development Ayman Al-Mufleh Thursday.

In press statements, Mufleh indicated the affected families will be provided with mental health services by the Ministry of Health, the Royal Medical Services, and associations.

He pointed out that His Majesty's directives must be implemented.

For the third consecutive day, rescue teams of the Public Security Directorate continue their search for people trapped underneath the rubble of the collapsed building.

The collapse, which occurred on Tuesday, Sep. 13, killed 10 people and injured 10 others.

In a phone call with Maj. Gen. Maaytah, King Abdullah stressed the need to provide all means necessary to assist and ensure medical treatment for those impacted by the collapse, urging bolstering capacities to mitigate the losses caused by the collapse.

His Majesty directed all state institutions to enhance cooperation in dealing with this incident and support rescue teams, commending the efforts of the PSD’s civil defense teams, as well as medical workers and all involved parties.

The King expressed his deepest condolences over those who died in the collapse, wishing the injured a speedy recovery.