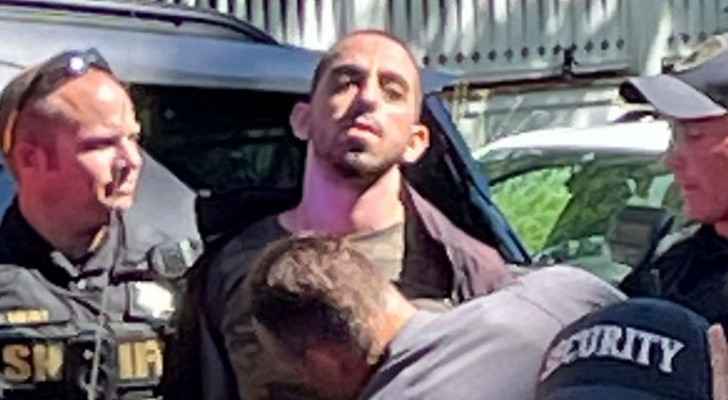 The British writer Salman Rushdie is in the hospital, where he was put on a respirator after a man stabbed him in the neck and stomach during a conference in New York State Friday.

The attack sparked a wave of international condemnation, and the White House considered it an "appalling act of violence."

The attacker was immediately arrested and placed under investigation. The police pointed out that Hadi Matar, 24, lives in Fairfield, New Jersey.

He continued, in an interview with Agence France-Presse, "He was born and raised in the United States, and his father and mother are from Yaron."

"Congratulations to this brave and duty-conscious man who attacked the apostate and villainous Salman Rushdie," wrote the newspaper, whose chairman is appointed by Supreme Leader Ayatollah Ali Khamenei.

"Let us kiss the hand of the one who slashed the neck of the enemy of God with a knife," it added.

Immediately after the attack on Salman Rushdie and his interlocutor in a lecture hall at a cultural center in Chutokoa, northwest New York, the writer was taken by helicopter to the nearest hospital, where he urgently underwent surgery, New York State Police Major Eugene Staniszewski told reporters.

The police had announced before 11:00 (1500 GMT) that a man "rushed into the theater (the amphitheater) and attacked Salman Rushdie and his interlocutors," explaining that he "stabbed" the writer "in the neck" and "in the stomach".

He said that 75-year-old Salman Rushdie "will likely lose one of his eyes, his arm's nerves have been cut, and his liver has been stabbed and damaged," noting that the writer is connected to a respirator.

Karl Levan, a political science professor who was in the hall, told AFP that a man rushed onto the stage where Rushdie was sitting and stabbed him violently several times "trying to kill him."

Salman Rushdie was born on June 19, 1947 in Bombay, two months before India's independence, and was raised in a family of wealthy and progressive Muslim intellectuals. He angered the Muslim world with his novel "The Satanic Verses," which prompted Ayatollah Ruhollah Khomeini to issue a fatwa in 1989 calling for his killing.

The novelist has since been forced to hide and live in secrecy under the protection of the police.

He suffered severe isolation, exacerbated by his separation from his wife, American novelist Marianne Wiggins, to whom he dedicated his book "The Satanic Verses". For years, he has lived out of sight in New York, where he has gradually resumed a semi-normal life, continuing to defend in his books.

But the "fatwa" was not rescinded, and the attacks targeted many of his book's translators, injuring some and killing others, such as the Japanese Hitoshi Igarashi, who was stabbed several times in 1991.

French President Emmanuel Macron announced Friday in a tweet, "For 33 years, Salman Rushdie has embodied freedom and the fight against obscurantism (...) His struggle is our struggle, and it is a global struggle. Today, we stand by his side more than ever."

In turn, British Prime Minister Boris Johnson condemned the "horrific" attack, stressing that "violence can in no way be a response to words."

Rushdie family 'relieved' he is off ventilator: son

Rushdie family 'relieved' he is off ....