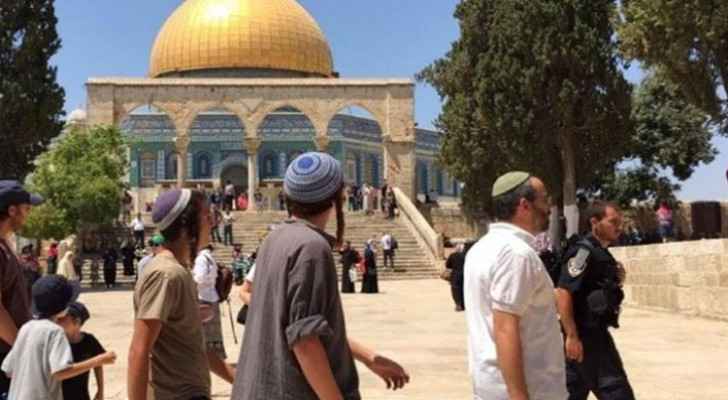 He added that he would allow MK Itamar Ben Gvir to storm Al-Aqsa.

And 16 members of the Knesset of the Israeli occupation signed a request to close Al-Aqsa Mosque to Muslims on Sunday, and to prevent them from praying in its premises.

And they demanded an urgent discussion of the demands made by the “Mount Temple in Our Hands” organization to the Israeli occupation authorities regarding the storming of Al-Aqsa Mosque on the anniversary of the “destruction of the temple.” Its demands came in allowing the settlers’ groups to storm Al-Aqsa Mosque simultaneously, not in successive groups, and reducing the waiting time at Gate Maghrebi.

Groups affiliated with the so-called "Union of Temple Organizations" called on their supporters and settlers to participate widely in storming the blessed Al-Aqsa Mosque, on Sunday.

The "Temple Groups" (extremist Jewish groups) intensified, through their websites and social media pages, calls for large mass incursions and the performance of Talmudic rituals in the courtyards of Al-Aqsa Mosque, on August 7, allegedly coinciding with the so-called "memorial of the destruction of the Temple."

Extensive incursions into Al-Aqsa Mosque are organized every year, with the participation of senior rabbis and settlers from settlements in the West Bank and Jerusalem, and officials of the "temple" organizations.