No reported injuries in UAE's Fujairah due to floods: Police

No reported injuries in UAE's Fujairah due to floods: Police 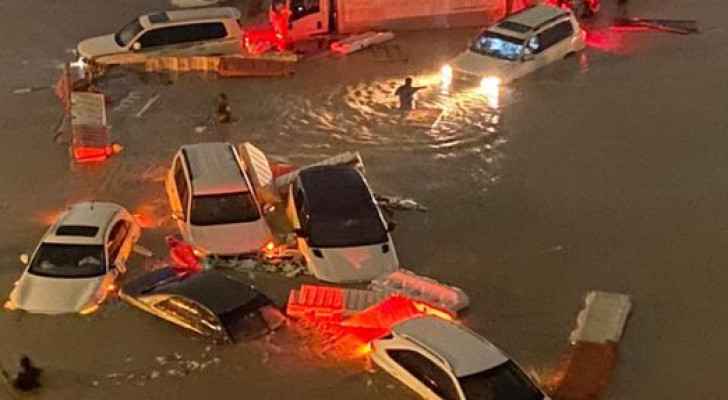 United Arab Emirates recorded the highest amount of rainfall in 27 years following the torrential rains the country witnessed over the past two days, according to the National Center of Meteorology.

Fujairah’s port station recorded 255.2mm of water, a number that is the highest in the Gulf country during July, reported Khaleej Times.

Masafi, which is a town in the northeast of the UAE located in Ras Al Khaimah emirate and is close to Fujairah emirate, recorded the second highest at 209.7mm and the third highest was recorded in Fujairah Airport with 187.9mm of rain.

Fujairah Police confirmed that no injuries were reported as a result of the floods, and that the damage was limited only to houses and vehicles.

The police statement added that the emirate had received urgent support from the Abu Dhabi and Dubai police.

Additionally, Vice President of the UAE, Sheikh Mohammed bin Rashid, ordered rescue teams in Dubai to immediately assist the ongoing rescue operations in the Emirate of Fujairah as well as the eastern regions of the country, which were hit by heavy rain on Wednesday.

An emergency committee was also formed to work on limiting the damages of torrential rain in the Emirates and to transfer all families affected by the rain to temporary shelter sites and nearby hotels.

Notably, the Cabinet had directed all federal agencies working in areas that were affected by rain and strong torrents, especially in the emirates of Sharjah, Ras Al Khaimah and Fujairah, that their employees work remotely on Thursday and Friday.

This decision excludes employees in civil defense, police and security agencies that deal with disasters.

UAE denies reports of explosions at ....