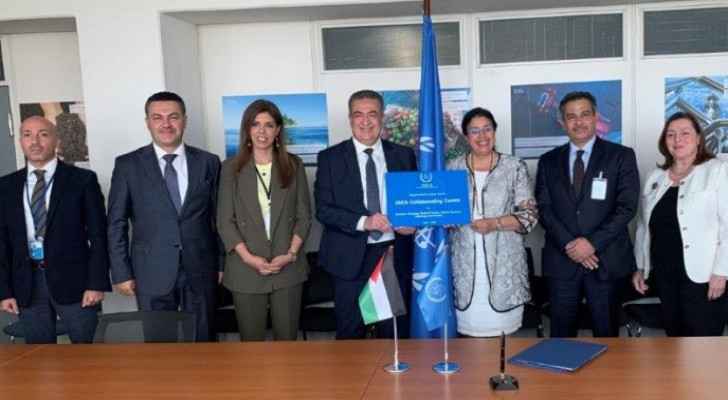 King Hussein Cancer Center (KHCC) is pleased to announce the signing of a cooperation agreement with the International Atomic Energy Agency (IAEA) at the latter’s headquarters in Vienna. Director General Dr. Asem Mansour signed on behalf of KHCC, while Deputy Director General Dr. Najat Mukhtar signed on behalf of the IAEA. The event was attended by the Jordanian Ambassador in Vienna, Mrs. Lina Al-Hadid, in addition to the President of the agency’s Health Department, Dr. Mai Abdulwahab and several other department heads. In attendance from KHCC were also two experts in the usage of atomic energy in medicine, President of the Training Academy, Dr. Jamal Khader, and Manager of the Atomic Medicine Department, Dr. Akram Ibrahim.

Dr. Mansour declared that with the signing of this agreement, KHCC has become the first collaborative center of its kind in the region to be accredited by the IAEA. Through this new partnership, the center will share its expertise and competencies in advanced cancer care with the IAEA.

He also added that in light of the unique cooperation with the IAEA, and in accordance with KHCC’s strategic vision to build a strong network of international collaborators and support global research and skill improvement, KHCC is proud to join the agency’s team of experts. Furthermore, he said, “We are delighted to be here today and celebrate this blooming partnership, as we join efforts to target a diverse spectrum of areas starting with radiation oncology, nuclear medicine, medical physics, radiology, and even expanding to include nutrition.”

Dr. Mansour explained that over the years, KHCC has flourished into a regional and international center for training and education, and this commitment supports the continual development of our scientific cooperation with international partners on all levels, in Jordan and beyond. He stressed that: “Throughout this unique partnership, the IAEA has remarkably supported KHCC in capacity building through several short and long training opportunities conducting workshops at KHCC and providing technical assistance in numerous areas.”

Moreover, several KHCC staff members have participated in international research projects supported by the agency as principal investigators, and many of these papers have now been published. The center also trains a number of experts, from several countries, in the field of medical radiation with the agency's support.

Dr. Mansour also gave his thanks to the Jordanian Atomic Energy Committee and the Jordanian Embassy in Vienna for their role in facilitating this remarkable agreement.

Putin tells IAEA's Grossi Moscow is 'open to dialogue' on ....

KHCC first in Jordan to receive ....

Smoking cessation services are essential to ....

Smoking cessation services are essential to ....