King in interview with Hoover Institution: Relationship with US institutional, based on trust

King in interview with Hoover Institution: Relationship with US institutional, based on trust 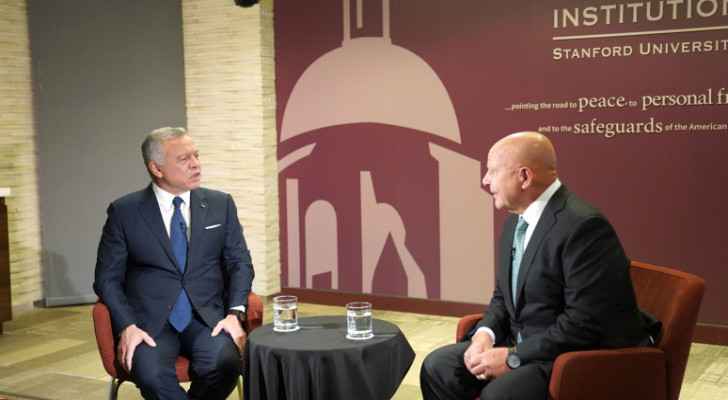 Jordan’s relationship with the United States is institutional and one of the strongest in the region, because it is based on trust, His Majesty King Abdullah said in an interview with H.R. McMaster in Washington, DC, for the Battlegrounds series by Stanford University’s Hoover Institution.

“My father met Eisenhower as his first presidential contact, and this is an institutional relationship, not only with consecutive administrations, but with the military and the Congress, and it is a very strong one, I think it is probably one of the strongest in the region, especially based on trust,” King Abdullah said in the interview, which was recorded last week and released Wednesday on the Hoover Institution’s platforms.

In his interview with Battlegrounds, a programme that features interviews with world leaders on their views on issues of relevance to US foreign policy, His Majesty said Jordan lives in a difficult region, and time has shown that Jordanians and Americans stand shoulder to shoulder in the face of different conflict zones.

Answering a question on regional violence and wars, the King said all regional stakeholders currently seek to look at the glass half full moving forward.

His Majesty pointed to challenges in Yemen, concern over the humanitarian disaster in Lebanon, in addition to two years of the COVID pandemic, and the re-emergence of Daesh in Syria, Iraq, and Africa.

The King said his visit to the United States was aimed at coordinating with friends and planning tactically and strategically for 2022.

On his vision for joint Arab action, Jordan’s role in the region, and the importance of isolating and countering terrorist groups, His Majesty stressed that there has always been joint Arab action and coordination against the threats of Daesh.

The King highlighted the importance of following a holistic approach to address various challenges at the same time, pointing to the role of Aqaba Process meetings, and expanding their scope to include South American and Latin American countries.

His Majesty added that he engages with Arab leaders in discussions on how countries in the region can find solutions for their own problems, and “do the heavy lifting”, instead of seeking solutions from the United States, noting that several meetings were held over the past months to discuss charting a new vision for the region.

“So you will see Jordan, Saudi Arabia, the UAE, Iraq, Egypt, and some of the other Gulf countries really coming together to tie in and chart a vision for their peoples and have that coordination” before requesting any help, the King added.

But His Majesty said he has consistently warned American presidents that they ignore the Middle East “at their own peril”, and therefore the Palestinian issue must be resolved.

“No matter what relations Arab countries have with Israel, if we don’t solve the Palestinian issue, it is really two steps forward and two steps back,” the King stressed.

Responding to a question on the relations between the UAE and the US, the King called for understanding the nature of ties between the two countries.

“I think the Emiratis are being put unfairly into a box… Again, this is a nation that has spent 30 years in six campaigns fighting side-by-side with the United States,” His Majesty said, adding “this is a very capable, wealthy country that has investments all over the world.”

Answering a question on dealing with Iran, the King cited diplomatic efforts from some Arab countries to communicate with Tehran, adding, “we want everybody to be part of a new Middle East and to move forward, but we do have security challenges”.

His Majesty noted that the presence of the Russians in the south of Syria was a source of calm.

“That vacuum will be filled by the Iranians and their proxies, so, unfortunately, we are looking at maybe an escalation of problems on our borders,” the King said.

King departs Jordan to participate in ....