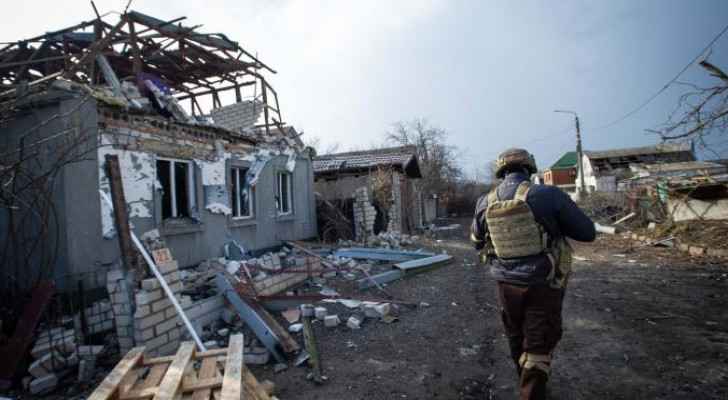 President Volodymyr Zelensky is set to hold talks with G7 leaders via video conference to discuss the situation in his country.

Further sanctions -- or at least a tightening of the huge array of economic punishments already inflicted on Russia -- are expected to be discussed.

Deputy Prime Minister Iryna Vereshchuk says "all women, children and the elderly" have been evacuated from the besieged Azovstal steel plant in the destroyed port city of Mariupol.

Kyiv urges aid agency Doctors Without Borders (MSF) to evacuate its soldiers from the steel plant, adding those wounded are "dying because of gangrene and sepsis" without medicine.

Russia holds its final rehearsal for an annual parade marking the Soviet victory in World War II, where its military might will be showcased amid Moscow's ongoing campaign in Ukraine.

President Vladimir Putin is expected to deliver a speech during the parade, which some Western officials believe could be a declaration of all-out war on Ukraine, speculation the Kremlin has dismissed as "nonsense".

Ukraine's defense ministry says it has destroyed a Russian landing craft near the Black Sea's Snake Island, posting overhead footage on social media of what appears to be an explosion over a light craft. Russia has not yet confirmed the strike.

Snake Island became a symbol of Ukrainian resistance after its soldiers colorfully rebuffed a demand by the Russian warship Moskva to surrender.

The Council of Europe's human rights commissioner, Dunja Mijatovic, calls Russian violations of human rights in Ukraine "staggering" after a four-day visit to the country.

The visit to areas outside Kyiv illustrated "mounting evidence of widespread arbitrary killings, torture, and enforced disappearances," the council says in a statement.

Italy has impounded a $700 million, 140-meter mega yacht as speculation swirls it could belong to Putin.

An Italian investigation has helped establish "significant economic and business links" between the official owner of "Scheherazade", and "eminent people in the Russian government", as well as Russians on the West's sanctions list, the economy ministry says.

US First Lady Jill Biden visits refugees from Ukraine in Romania, where women and children tell her their stories.

"We stand with you, I hope you know that," she tells them during a visit to a school in Bucharest, where she is accompanied by her Romanian counterpart Carmen Iohannis.

US President Joe Biden announces a new $150 million weapons package to Ukraine, including artillery munitions and radar, while urging Congress to pass a $33 billion aid package including $20 billion in military aid.

The new batch brings the total value of US weapons sent by the Biden administration to Ukraine to $3.8 billion since Russia entered Ukraine on February 24, says Secretary of State Antony Blinken.